Zero, the King of the Little Devils, is a secret playable character in the first game, Bayonetta.

Zero's fighting style is nearly identical to Bayonetta's. He can enter Witch Time through precise dodging and frame-perfect parrying and can use accessories and items, but takes exactly 7900 damage from all enemy attacks. As a result, he cannot survive more than two enemy hits (three with all Witch Heart upgrades). Like Bayonetta and Jeanne, he will not die in one hit as long as he has more than 1 HP, so even the slightest healing helps him survive.

Zero can summon the Little Devils by holding

. He does not need the Infernal Communicator, and equipping it does not add to the effectiveness of the summon. While this means Zero can use other accessories' powers at the same time, doing so weakens all powers in play; e.g. Zero cannot summon more than two Little Devils, two Pulley's Butterflies and/or one shadow from Sergey's Lover at the same time. 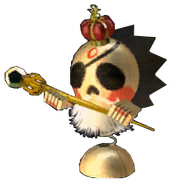 Zero's doll from the character selection