watch 01:16
'Bayonetta' Lore: Wicked Weaves
Do you like this video?
Play Sound
Wicked Weave techniques use Bayonetta's hair as a conduit to summon forth demonic entities.― Bayonetta Game Manual 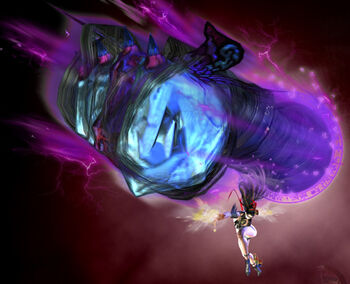 Father Rodin also uses his own variant of Wicked Weaves in the fight against him, using only angelic punches against Bayonetta that do massive damage. Depending on the weapon equipped, some of Bayonetta's attacks will perform different Wicked Weave animations and effects.

All three of these weapons produce Wicked Punches and Wicked Kicks that launch enemies away from Bayonetta in a straight line. Compared to other Wicked Weaves the ones produced by Scarborough Fair and Bazillions come out fast and deal average damage, knockback, stagger, and stun when they strike enemies. Onyx Roses' Wicked Weaves however, deal slightly more damage, likely to balance out the weapon's shorter range.

Unlike most other weapons, Shuraba doesn't use Bayonetta's hair as a conduit. Instead, Wicked Weaves produced by this weapon are demonic blades of translucent energy that mimic Bayonetta's sword swings, creating cleaving swipes or far-reaching jabs and lunges. Frequently referred to as "Wicked Blades" or "Wicked Slashes" by fans, Shuraba's Wicked Weaves have very little knockback and stagger against enemies, especially larger enemies or enemies on higher difficulties. However, they deal the most damage of all Wicked Weaves in Bayonetta and frequently swing in wide arcs, allowing them to deal heavy damage to an entire group with a single slash.

Most Wicked Weaves made by this weapon remain Wicked Punches. However, when executing the Kulshedra's unique combo,

, a Wicked Back Hand will be performed instead which slams all enemies away in a 180 degree arc from Bayonetta. Though this backhand does similar stagger as a normal attack, it knocks smaller enemies and stunned enemies away a considerable distance, keeping in line with Kulshedra's theme of controlling the battlefield and allowing Bayonetta to stack at range. When in Serious Mode or with the Climax Brace equipped, all punches produce a Wicked Back Hand.

Regardless of their placement on Bayonetta's hands or feet in a set, all Wicked Weaves produce by Durga will be done with Madama Butterfly's hands. They also take on the appearance of Durga's current elemental form, becoming fiery orange with Durga Fire or a neon electric blue with Durga Lightning. When produced, all Wicked Weaves will either become fingernail thrusts or clawing swipes, using Madama Butterfly's nails to pierce and scratch enemies. Durga Fire's Wicked Weaves deal high damage damage, and frequently stagger even medium-sized enemies. By comparison Durga Lightning deals less damage, but with its much faster combos they come out more often.

Wicked Kicks produced with Odette will take on a frost and ice-like appearance, changing the kicks to a bright glowing white color. Aside from cosmetic changes, the kicks will be slightly increased in damage and stagger but have less knockback. This allows Bayonetta to exploit Odette's mobility, giving her time to skate towards her target or gain some distance. The final Wicked Kick at the end of Odette's unique combo:

does significant damage if all kicks before it were "Charged". When Bayonetta is in Serious Mode or is wearing the Climax Brace, all Wicked Kicks will be leg sweeps that function almost exactly like Durga's scratching attacks.

Wicked Punches and Kicks created by the Kilgore are largely the same as their small arms versions both in appearance and function. The only differences are when the Kilgore's two unique combos are done;

. When these two combos are executed, the final attack will launch a projectile Wicked Punch or Kick that will travel in a straight line towards Bayonetta's target. It will hit it a number of times as it pushes the enemy back before continuing through it to do the same to all enemies in a line until the Wicked Weave hits a wall. When Bayonetta is in Serious Mode or is wearing the Climax Brace, all attacks will produce these projectile Wicked Weaves.

Though most Wicked Weaves will remain the same, the Sai Fung's

combo will produce a Wicked Palm Thrust instead of a punch. This palm thrust has enormous knock-back and possibly the highest stagger rate of all Wicked Weaves while also doing very high damage. It also has a much larger hitbox than a typical wicked weave, knocking most enemies in front of or around Bayonetta away in a straight line. All of this is likely because the Sai Fung does minimal damage and has no real knock back on any of its moves, so this unique Wicked Weave is in place to make up for its shortcomings in those departments.

The Pillow Talk has no proper Wicked Weaves; instead it must be charged by holding down

. Once the energy blade has reached its second charged state, its blade will be increased to roughly three times in length, and all of its attacks will do substantially increased damage and count as Wicked Weaves for a short time. When in Serious Mode or with the Climax Brace equipped the Pillow Talk will be perpetually fully charged.

Both of these weapons are incapable of producing Wicked Weaves, even when Bayonetta is in Serious Mode or has the Climax Brace equipped. This is due to the Handguns being too weak to channel powerful magic without being destroyed. Rodin's reasoning however is likely because it is a weapon of angelic origin and as such cannot be used in tandem with Infernal Demon attacks. Despite this shortcoming, Rodin does enough damage and has enough flexibility in its combos to make it a moot point.

The Wicked Weaves produced in Bayonetta 2 change in different demons depending on the particular weapon that has been equipped.

Love Is Blue produces Wicked Weaves in the same manner as Scarborough Fair, albeit with more erratic and violent motions instead of the straight and stiff Wicked Weaves as its predecessor. As Love is Blue are a whole new set of guns, their power limits have risen in tandem with Bayonetta's higher skill in combat, meaning these "newer" Wicked Weaves are slightly more damaging than the originals. Depending on the enemy being faced, Love Is Blue can juggle them in the air or catapult them across the battlefield, but are less likely to stun the more resilient enemies such as the Accolade variants.

When Umbran Climax is activated, Love Is Blue is a polyamorous weapon regarding the demons it manifests in Infernal Weaves. Ranging from Madama Butterfly to Labolas and Hydra, Love is Blue has the most variety when it comes to the selection of demons.

Similarly to the Shuraba, Rakshasa produce slashes of demonic energy instead of being formed from Bayonetta's hair and have a similar degree of movement and arcs, slashes and stabs when utilised. Also like the Shuraba, the Wicked Weaves are particularly damaging and their radius thanks to the addition of two blades make them ideal for dealing out massive damage to groups of enemies.

When Umbran Climax is activated, Rakshasa's Infernal Weaves manifests as either Mictlantecuhtli on the hands which attacks with a foward spiralling head-butt, or Diomedes on the feet which cleaves and drills with its horn.

Alruna produces similar Wicked Weaves to Shuraba, manifesting as vines of spiked, red demonic energy instead of hair that sweep in long ranged arcs and spirals that shred and bludgeon enemies. Though not particularly damaging, Alruna's Wicked Weaves have the ability to grab any enemy when being executed, making them ideal for crowd control.

The Infernal Weaves created by Alruna in Umbran Climax summon Hydra when equipped on hands which sweeps its tentacles in a circular arc around Bayonetta, or Baal when equipped on feet who uses her thorned, mace headed tongue to evicerate Bayonetta's enemies.

In both regular gameplay and Umbran Climax, Undine summons Hydra which sweeps and jab at enemies from all angles. The demon appears drenched in either fire or ice depending on the element currently chosen.

Like Rakshasa and Alruna, Chernobog produces non-hair based Wicked Weaves and creates giant, purple, spinning versions of it's blades. They can hit multiple times in a large radius and even knockback and stun the largest of Beloved Variants when powered up with Umbran Climax.

This weapon's Infernal Weaves also summon Mictlantecuhtli, which manifests from above in a screech that hits all enemies in a very large radius.

Takemikazuchi's Wicked Weaves summon the demon Hekatoncheir who mimics the hammer's attacks by punching enemies and slamming them to the ground. Takemikazuchi has the strongest Wicked Weaves in the game and is able to stun the largest of enemies with ease. However, their speed is rather low to make up for this boost in strength.

The hammer's Umbran Climax summons Hekatoncheir for every hit, summoning multuple hands depending on how long the hammer is charged for. Up to 3 hands can hit an enemy at once.

The Chain Chomp's Wicked Weaves create a blue silhouette of the creature that launches from it and knocks enemies away with multiple bites. In Umbran Climax, every swing of the Chain Chomp towards an enemy creates these silhouettes.

Salamandra differs from the other Gold LP weapons in that they are unable to produce any regular sort of Wicked Weaves. In Umbran Climax, the chainsaw blades instead become gigantic every time they hit an enemy.

As with the first game, both of the Handguns and Rodin are incapable of producing Wicked Weaves, due to the Handguns being too weak to channel magic and Rodin's incredible power thanks to manifesting as both angelic and demonic weapons in its second incarnation.

As an unlockable weapon in the game, Bayonetta 2, Scarborough Fair's Wicked Weaves are slightly altered to resemble Love Is Blue in both regular gameplay and powered up with Umbran Climax in terms of damage, knockback and stunning capability. The same is also applied to Shuraba which creates singular blade Wicked Weaves that match the Rakshasa swords. 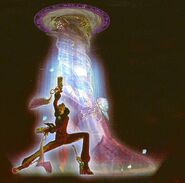 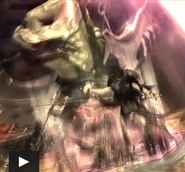 Retrieved from "https://bayonetta.fandom.com/wiki/Wicked_Weaves?oldid=50883"
Community content is available under CC-BY-SA unless otherwise noted.