Valor is an angel and boss enemy that appears in the second game, Bayonetta 2. Appearing to impede Bayonetta and Loki's crossing of the Bridge To The Heavens, it is implied to be a more heavily armored Valiance and will stop at nothing to succeed in eliminating evil.

"As his name would imply, Valor is a warrior that regards bravery in the highest degree. Taking the form of a shield, he stands with Valiance at the front lines of Paradiso's wars against Inferno.

It is said that when people are in need, a warrior clad in solid gold armor will appear to rescue them, carrying a sword and shield of incredible power. While fending off incoming evils with the shield, the warrior will eliminate its enemy with a single blow of its sword, claiming victory for those with a strong-held faith."

Much like Valiance, Valor resembles a knight-like figure, though this time covered in golden shiny armor with a cape attached to the shoulders. Its face is embedded in the sun shaped shield with a face on it, it carries much like how Valiance's was in its sword. The sword Valor wields is also entirely golden and has the ability to extend to ridiculously long lengths to slice the entire structure of the Bridge to pieces.

Valor makes its initial appearance during Chapter VI and acts as the boss of that chapter. As for Bayonetta and Loki's attempt to cross the Bridge to reach Fimbulventr, Valor uses its shield to slice up the walkway and send them both tumbling down the Cathedral of Cascades' tower. Bayonetta sprouts Malphas' wings and takes to an airborne battle as they fall.

Valor uses its sword for the majority of its attacks, using its incredible range to destroy the tower in an attempt to catch Bayonetta off guard. The fight eventually ends in an underwater area where Valor continues to use wide slashing attacks and even rides on top of its shield like a surfboard.

Just as it tries to land a blow, Bayonetta summons Hydra and binds the angel's body within its tentacles. Despite knowing it is about to be defeated, Valor leaves Bayonetta and Loki a parting gift and uses the last sword swing to cut one of Hydra's head, and open the bottom of the tower and send both swirling to underneath the Cathedral. Its shield/head is then dragged to Inferno.

Valor makes a reappearance during the final chapter, attacking Bayonetta and Balder on their way to Fimbulventr.

Due to Valor's tendency to close and gain distance rather quickly, thanks to its shield riding and movements backward through the water, longer-ranged weaponry such as Love Is Blue and Kafka are recommended in order to maintain your combo score. When able to activate Witch Time and to do damage up close, most melee-based weapons such as Rakshasha and Salamandra work wonders to whittle down Valor's health. 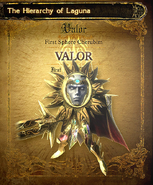 Retrieved from "https://bayonetta.fandom.com/wiki/Valor?oldid=50856"
Community content is available under CC-BY-SA unless otherwise noted.