Urbane is a new angel enemy that appears in the game, Bayonetta 2. First appearing in Chapter I, Urbane serves the same role as Fairness; it acts as a mini-boss throughout the game, appearing alone or alongside its counterpart, Gravitas.

"The chains of a new era will always give birth to new angels. This is because angels are given form by the fears, doubts, and prayers mankind bases its faith on--feelings which change with mankind's material obsessions.

As a notably advanced being even compared to other angels, Urbane, a Virtue in the angelic hierarchy, is said to be shaped by the subconscious fears of humans. In modern eras, he often appears as a giant with a ball and chain on each of his arms.

Urbane's power to reduce the triumphs of civilization to mere ashes with a single swing of his arm most likely reflects the subconscious fears man harbors towards both the natural world and their own society."

Urbane is a fire-based elemental angel, seen mostly in its primary forms of attack. Its limbs end a mace-like weapon, being able to sweep it out a frontal arc, ram the weapon into the ground or fire the ball & chain from the air. A rarer but much more damaging attack is where it shoots a powerful laser from its head after a brief charging period. When reduced to low health in Chapter IV, Bayonetta will be able to perform a Climax in which she summons the monstrous Cerberus-like demon Labolas to tear Urbane apart.

Upon being defeated, Urbane may sometimes drop its mace weapon for Bayonetta to use. With its fire affinity intact, she can use it to do a series of wide-reaching swings that heavily damage opponents.

Despite being rather monstrous in size, Urbane is a rather slow enemy and easily telegraphs its attacks through long animations. Being easy to activate Witch Time against, most weapons in Bayonetta's arsenal will suffice in fighting it. Though attacking Urbane's legs at ground level makes it safer to avoid its swinging arcs, aerial attacks against its larger top half with weapons such as Love Is Blue and Rakshasa can be more effective in dealing out quick damage.

In Christian mythology, Virtues supervise the movements of heavenly bodies and maintain order. 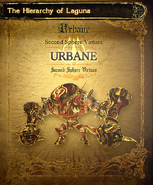 The angelic weapon Urbane leaves behind.

Retrieved from "https://bayonetta.fandom.com/wiki/Urbane?oldid=50324"
Community content is available under CC-BY-SA unless otherwise noted.