None
Unforgiven is the name Rosa's signature handguns, and are the only weapons she is capable of using. Individually called 'North, South, East, and West', she used them during the time of the Witch Hunts.[1]

"A set of guns found by Rosa after having been long sealed away for being used in the betrayal and injury of an Umbran sister. The set is comprised of four individual guns named North, South, East, and West. As they were originally designed for witches, their affinity with magic is strong, and though old, the power of a single shot is immeasurable. However, it goes without saying that these guns, meant only for chosen Umbra, should not be allowed in the hands of one who broke the laws of the clan by loving a Lumen Sage. Though they were returned to Rosa as the clan faced the threat of annihilation, they no longer contain any of their original power. They now exist only as a weapon of the forsaken, to hold back the disaster that encroaches upon her."[1]

Long ago, the Unforgiven set was created for chosen members of the Umbra Witches until it was used in the betrayal and injury of an Umbra Witch. It was then since sealed away and much of its original power was lost.[1]

Unforgiven are automatically obtained when Rosa becomes a playable character in the Story mode and Tag Climax. They are the only weapons she can wield, and they cannot be un-equipped or changed for another weapon. By extension, no other character is capable of wielding them.

Unforgiven share the basic move-set of Bayonetta and Jeanne from the first game, more specifically having a very similar moveset to the slower and more powerful Onyx Roses, though they do have a few similarities to the Scarborough Fair as well. True to their built-in magical powers mentioned in their description, Unforgiven is an extremely powerful weapon that is capable of dealing high damage and racking up incredible combo points very quickly. In addition, Unforgiven's bullets have a special property that allows them to penetrate through smaller enemies and hit up to one additional enemy behind them.

If one takes all of these factors into account, and Rosa's damage multiplier as well, it becomes readily apparent that these weapons have the potential to deal the most damage of any standard bullet weapon across the series thus far, and by no small margin.

Bullet Climax: Functioning identically to Love is Blue's Bullet Climax, Rosa stands motionless and takes aim at nearby enemies to unleash a barrage of powerful shots from either hands or feet, automatically firing at any surrounding enemies. If Rosa has available Magic power, the bullets will be charged up, and the Bullet Climax can be extended until her Magic runs out. It should be noted that bullets fired during this Bullet Climax do significantly more damage per-shot than both Love Is Blue and Scarborough Fair, and unlike both of those previous weapons, appears to have no damage fall off at long distances.

Charge Modifier: Holding down the corresponding attack button will cause Rosa to fire off one to three shots before transitioning into her next attack. Functioning very similarly to the Onyx Roses' Charge Modifier in timing, however Unforgiven has no immediate damage penalty at long distances and can hit enemies much farther away than the shotguns, making them powerful in both melee and ranged situations.

Wicked Weaves: Unforgiven calls forth Madama Khepri's fists and feet to punch, kick, and generally pummel enemies at the end of Rosa's combos. Whether owing to Madama Khepri's power or to Rosa's own considerable magical ability, these Wicked Weaves deal comparatively more damage than Bayonetta's Infernal Demons that are summoned during her Umbran Climax. As Rosa's Umbran Climax state causes her to don the Umbran Armor, Unforgiven do not contribute to it.

Concept art showing in depth detail for the Unforgiven.

Rosa uses Unforgiven to fire a heart-shaped spread of bullets. Note that the revolvers are so large that they actually clip through the bullets. 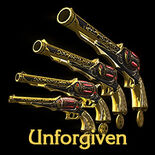