Umbran Climax (also called Supercharge[1]) is a technique exclusive to the second game, Bayonetta 2, similar in behavior to Serious Mode that allows a user to use the strongest of their techniques at the expense of their magical power for a short duration of time.[2]

The ability is activated by pressing the "L" button and can only be activated when the magic gauge is full, similar to Torture Attacks.

Appearing in a state similar to Serious Mode allows for infinite Wicked Weaves to be used for a short duration of time dependent on the available magical power a user possesses. This also allows the capability of using Wicked Weaves, magic attacks in which summons forth an Infernal Demon for a finisher attack. This also can allow the spawning of Umbran Armor for a period of time.[2]

The precise effects of Umbran Climax depend on the character currently being used, though all follow the trend of a brief power up to attack.

Bayonetta and Jeanne's Umbran Climaxes function in the same way as each other. When used, the witches glow a distinct purple color and Bayonetta's hair becomes long and flowing with a silver chain pattern laced into it, mirroring the appearance of 'Serious Mode' in the first game. The strength of Bayonetta and Jeanne's attacks are increased as well as their overall range and area-of-effect thanks to the Wicked Weaves which are called forth with every attack. Each combo also ends with an Infernal Weave, an ability that calls forth an Infernal Demon to release a devastating final attack. If either witch is not at maximum vitality, activating Umbran Climax will slowly regenerate their health for the entire time it is activated. Additionally, both Bayonetta and Jeanne gain super armor in which they don't flinch when getting hit with an attack. They also become immune to time manipulation magic from enemies like Balder's Lumen Sage variation of Witch Time, Light Speed.

The demons summoned during Umbran Climax are dependent on which weapons are currently equipped and different combinations create different results depending on the combo and whether the weapon is on hands or feet.

Unlike Bayonetta and Jeanne, Rosa's Umbran Climax does not summon Wicked Weaves or demons for each of her attacks. Instead, her powered-up state allows her to ride the Umbran Armor. She is able to use its attacks for the duration of her magic gauge, including its Charge Modifiers and the effect can be used with Bayonetta and Jeanne as well if they equip the Earrings of Ruin accessory.

Balder's version of Umbran Climax is similar to Bayonetta and Jeanne's, though obviously based around the beings of Paradiso instead of the Infernal Demons. When activated, Balder gains his peacock feathered wings and is able to create huge slashing attacks with his glaive weapon. Each combo finisher can also summon the Cardinal Virtues for the area of effect attacks and the particular one summoned depends on the combo being used.

In Tag Climax mode, Rodin has his own version of Umbran Climax. When activated, he creates a red shockwave around him and takes the form of Rodin, The Infinite One. In this form, all of his attacks deal more damage and possess a greater range when attacking, allowing him to exceed the damage limits of any of the other witches. 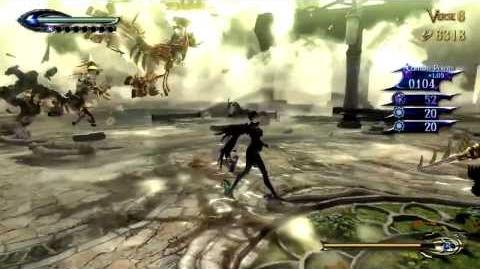 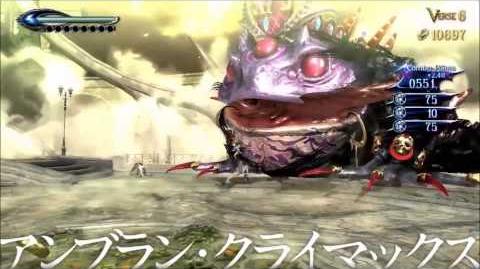