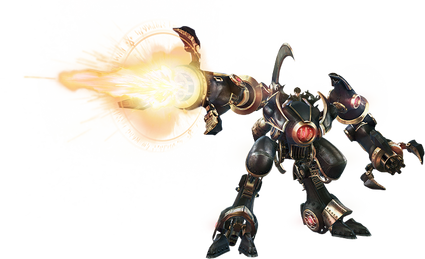 The Umbran Armor is a new type of weapon featured in the second game, Bayonetta 2. It is a heavy-duty, vehicular type of transport that is apparently modeled by the Umbra Witches for use during the Witch Hunts against the angelic forces.

The Umbran Armor can only be played normally during Chapter XIV of the game where both Bayonetta and Rosa use them to defeat an oncoming attack from angelic forces in Vigrid. Outside of this, equipping the Earrings of Ruin accessory will summon the Armor for use during Umbran Climax. The Umbran Armor by default is what Rosa uses for her Umbran Climax.

The Armor controls similarly to Bayonetta herself but does not use combos as she does. Instead, the Umbran Armor has a three-hit combo for punches and a two-hit combo for kicks. Attacks cannot be chained together, and Dodge Offset cannot be utilized.

Charge Modifier: The Umbran Armor will make use of the guns on each limb. Firing a string of high-damage bullet from the arms with their two machine guns and two high-powered guns on the feet are similar to shotguns for more powerful, short-range blasts. Some of the attacks these guns possess can bring even extremely powerful foes such as Aesir to their knees in seconds. The quickest way to kill enemies is by using the

combo, along with the charge modifier punch button, on the third strike the armor will fire with both arms, dealing extremely high damage.

button in mid-air will unleash a falling slam attack, this move is the Armor's most powerful attack, along with a considerable area of effect splash damage, dealing more damage if enemies are closer to the impact and knocking back enemies if they are close enough.

Chapter XIV & Umbran Climax: During Chapter XIV the armor deals significantly more damage than otherwise (2.5 times more to be exact,) and can be further empowered with Umbran Climax to double that damage.

Earrings of Ruin: The Earrings of Ruin accessory allows Bayonetta and Jeanne to don the Umbran Armor during normal play in place of their normal Umbran Climax. Though significantly weaker than the story mode version, this armor is still extremely powerful.

Rosa's Umbran Armor: In place of a normal Umbran Climax, Rosa will instead don the Umbran Armor, which deals 50% more damage than the armor that Bayonetta and Jeanne use while equipped with the Earrings of Ruin.

The mech firing its gun

The front view of the mech

Artwork of the Umbran Armor 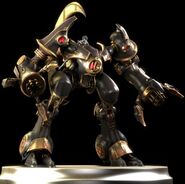