The Umbra, Overseers of Darkness

Active
Umbra Witches - controllers of the dark power. The ways of their discipline were actually quite varied - breathing, movement, medicine, and tactics were joined in the Middle Ages by training in the operation of heavy weapons, culminating in a curriculum whose total breadth and intensity are hard to ascertain.― Antonio Redgrave

The Umbra Witches are a clan of European dark arts practitioners from ancient times and the darker counterpart of the Lumen Sages. Being one of the two clans recognized as "overseers of history", the clan was formed after Lord Aesir bestowed the clan one of the Eyes of the World. Unlike the Lumen, they form pacts with Infernal Demons/Gods.[1]

Due to the events of both the Clan Wars and Witch Hunts caused by Loptr's influence and the Laguna's actions, the clan only has two known survivors.[1]

Pitying humans for their naivety, the god is known as Aesir would bestow one of the Eyes of the World to the clan that would become known as the Umbra Witches, granting them the "Left Eye of Darkness" while their counterpart, the Lumen Sages, were granted the Right Eye of Light. The Umbra Witches became one-half of the two clans who worked hard to maintain the balance of the world's light and dark forces in order to ensure the just passage of time.[2]

Throughout their existence prior to the Clan War and Witch Hunts, the Umbra Witches (and the Lumen Sages) were a feared clan, so much so that even other emperors and kings feared their power and made way for historical changes (though the exact changes remain unknown).[3]

At some point in time, both the Umbra and the Lumen came together in an effort to come up with measures to protect their homeland from invasion. Taking inspiration from Aesir's Golems, the Umbra and Lumen built their own variant of the occult device. However, proving to be too powerful to be easily controlled, the Umbra and Lumen sealed it away in a different dimension.[4][5]

Five hundred years ago before the modern-day, a Sage named Balder and a Witch named Rosa fell in love and conceived Cereza. This violated an age-old tenet that stated that "The intersection of light and dark would bring calamity to this earth". This broke the delicate balance between the two clans and sent them down a path of conflict, eventually sparking the Clan Wars by plunging all of Europe into a chaotic loop of battle, ambush, assassination, and casualty.[2] Unknown to both forces, the conflict was also further instigated by Loptr, the evil half of the God of Chaos who sought the Eyes of the World.[6]

Despite the sages' best efforts with the help of the heavens themselves, the Witches' efficiency in assassination and the use of the dark arts assured their upper hand. Years after, the witches emerged victoriously.[2]

After the Clan Wars, both Loptr and the Laguna launched another offensive campaign with the task of eliminating the weak Umbra Witches by rallying the human population into fear of the Witches' dark powers. As a result, they also manipulated the sole surviving member of the Lumen Sages, Balder, into helping them start what would be known as 'Witch Hunts' under the presumption of stopping a rebellion plotted by the Umbra Witches. While the residents of Paradiso yearn to awake Jubileus using the Eyes of the World, Loptr meant to use the force and remake himself into Aesir.[1]

A massive attack was launched by both angels and humans alike, resulting in massive extermination of Umbra Witches. During the battle in Vigrid, witches Bayonetta and Jeanne are surrounded by humans and angelic beings alike converging onto them. Not wanting the Left Eye of Darkness to fall into the angels and Balder's hands, she seals away Bayonetta in a gem and hides her body in a casket under a lake.[2]

Simultaneously, a temporal event ensured in which Balder of the past traveled to the future due to Loptr and framed his good half, Loki, for killing the Umbra Witch, Rosa. Aimed to kill Loki, the surviving witch Bayonetta battles the Laguna, Loptr, and eventually Balder until both of them are thrust into the same time frame. Reliving a similar moment of Rosa dying by Loptr, Balder learns of the deception created by Loptr and travels to the future and teams up with Bayonetta to defeat Loptr in the modern time frame. Eventually defeating the modern-day Loptr, who recreated himself to be Aesir, their hard-earned victory though at a cost: due to the evil nature of Loptr, this caused Balder to become evil from his influence and was transported back into the past to a time after the battle in Vigrid.[1]

Now evil due to Loptr's influence within his body, Balder took advantage of the Witch Hunts and subjugated the remaining Umbra to monstrous acts of capture and torture before finally killing them and leading them to near extinction in an effort to eventually resurrect Jubileus, The Creator and join the Trinity of Realities into one with Paradiso in control. Due to none being aware of his corruption and the angels framing Balder, he became known as the "Tyrant Sage" and was credited for being the sole being responsible for the seeming annihilation of the Umbra Witches.[7]

Though historically stated to have been annihilated, both Umbra Witches Jeanne and Bayonetta/Cereza survived the Witch Hunts.

There are two remaining Umbra Witches: Bayonetta and Jeanne.

Umbra Witches are usually women that wear formal tight-fitting outfits depending on their rank within their clan. They can use their hair to create their clothing using magic and commonly carry four guns with them at all times should they have to use their fighting abilities. The first two guns are dual-wielded in the Witch's hands, while the other two are mounted on the Witch's heels and are fired telekinetically through her magic.

They were a predominantly female society with strict laws regarding contact with all non-Witches, demanding that their magical arts be kept with the utmost secrecy.

What differentiates a Witch (and presumably a Sage) from a normal human being is her great control over Spirit Energy or magic. As Antonio Redgrave writes in his notes:

"Those with the power could become Witches despite being of low birth, and those without the power would be forced into secular life, regardless of any blood-ties to a Witch clan."

An all-female clan of Witches as per namesake, their ranks included only those who could harness spirit energy by birth and those who were strong enough to survive their brutal courses of training and study. Children born in the Witches' homeland of Crescent Valley were taught the workings of Spirit Energy from a young age, and would thus manifest abilities--if they had them--at an earlier age than children born elsewhere, although what constitutes an "earlier" age is unspecified. Upon becoming a woman, a trainee would take the "Witchly Vows" and become a full-fledged Umbra Witch, although some candidates of particular skill and achievement were permitted to take their vows earlier than this.

Those powerful enough to become heiresses of the entire clan matriarchy also undergo an intense duel to prove their worth; the role of the leader is also entrusted with watching over the Left Eye of the World.

In order to gain their power, all Umbra Witches make a pact with an Infernal Demoness to sponsor them and allow them to improve their power (perhaps as part of their Vows,) which allows them to summon the fists and feet of their sponsor to attack their enemies. The demon's silhouette is seen instead of the Witch's shadow to reflect this. When the Witch dies, her soul goes directly to Inferno as part of their contract.

They once paid great respect to the Lumen Sages and, from the existence of the Golem, they once had worked together for reasons unknown.

This article is a stub. You can help the Bayonetta Wiki by expanding it.

Notably, Umbra Witches are known to be powerful practitioners of a form of magic known as Dark Arts, revolving around the usage of Spirit Energy, an evocation of beings from Inferno, and optionally forming contracted with specific Contracted Demons to perform special techniques. Besides their sponsor, Umbran Witches may also summon other demons from Inferno by using a medium such as their hair and chanting a magic spell. It would seem that these chants, spoken in Enochian, are unique from Witch to Witch; they might be granted by the sponsoring demon, or they might be an invention of the Witch herself. Using magic, witches can travel from the normal world to the Purgatorio dimension, which allows them to travel unnoticed by the populace of the human world and fight beings that are usually invisible to humans, such as angels. Only the angels and other people with magical power/artifacts can see into this dimension.

Umbra Witches were also notably skilled in a form of combat known as Bullet Arts, a fighting style that combined melee combat with gunfire. Alongside their skill in such a fighting style, they also possess great weapon knowledge that allows them to master anyone that they pick up. Their supernatural connections to the underworld also give them incredible strength, acrobatic skills, and lightning-fast reflexes. Umbra Witches seem to be well versed in herbology and are able to concoct items that are able to heal them, increase their strength and magic power, etc.

While well versed in the supernatural and metaphysical arts, they were also keen in the arts of alchemy, chemistry, acrobatics, firearms training, medicine, anatomical health, and (what could be assumed) various sciences and technological prowess of many sorts, to temper and refine their body and soul in the process of handling the powerful forms of magic that they would come to wield.

Main article: Eyes of the World

Select Umbra Witches to inherit the Left Eye of Darkness, one of the Eyes of the World given to the clan long ago by the God of Chaos and Overseer of the Human World, Aesir. This power is granted only to the most powerful witch within the clan, candidates selected by the world itself.[8] The Left Eye of Darkness can allow a witch to discover deception and look through unaltered history[9] and possess similar energy-related powers used by the Lumen Sages' Right Eye of Light. Together, these eyes give the power of creation.[2]

One of the guns known as "Umbran Sisters." 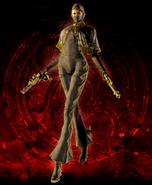 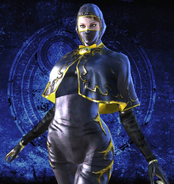 Model close up of the standard Umbran Witch in Bayonetta 2