Rodin
The Gates of Hell is the name of Rodin's bar that doubles as a demonic weapons market. It is here that Rodin sells many objects, such as healing items and various techniques for Bayonetta, as well as accessories and "treasures". While it is unknown what dimension the bar exists in, it appears to have hinted appearances on many planes and is likely located in New York City, as Enzo is seen inside the bar in a cinematic, and Bayonetta is shown from a map of the world, to have started her westward travel to Vigrid from a hinted area of the United States, while capable of entering to another part of the bar most similar to the establishment, using various portals found throughout the game.

Similar to how Vigrid is close to Paradiso in both architecture and structure, it could be that the area in which Rodin's bar is located is bordering Inferno much the same way. However, once it is revealed that Rodin is, in fact, a fallen angel who has been stripped of his original power, this could simply be the location of his choice due to the nature of the violent crimes and less than savory people who visit his bar based on the game's description.

The name of the bar is an allusion to Auguste Rodin's sculpture, "The Gates of Hell".

Rodin & The Gates Of Hell

There is a place beloved by wanted men and rogues, where money and power rule all. It is where I have established by the office. Those who call this place by its given name are instantly identified as newcomers, as the tired hands of this rathole all call it by a single name only – The Dump.

Bloody battles and dirty disputes over money are an everyday occurrence here, and the concept of concern for one’s fellow man was long since lost on The Dump’s denizens. What the people here are after, what they love to see, is not of this world.

They thirst for the uproar only the occult can inspire. The appearance of a specter, a man being devoured by a demon… these are the snacks they eat as they drink and cavort in The Dump’s numerous watering holes. It is this place that I have come on my pilgrimage in search of a grasp on reality.

The Dump is a wretched hive for all sorts of scum and villainy; home to everyone from black market businessmen, to informants, and devil hunters in between. But amongst them all, one man is particularly strange. His name is Rodin, proprietor of “The Gates of Hell” bar. His front may be that of a bartender, but rumor has it he is actually an arms dealer. Of course, if a man such as myself were to visit his establishment, there is no way all of his secrets would be laid bare; however, I can tell just by the air around him that he is a dangerous man. Unlike the standard assortment of thugs in this place, his is a sort of danger on a truly different level. According to my colleagues, if one carries enough clout here, Rodin is known to provide a gun or blade should the fee prove satisfactory.

That is all I have been able to wring out of people here. There are also rumors that if you enter the bar from some sort of hidden entrance, he will provide you things money cannot buy… Or so sayeth the gossips in this occult-obsessed town. They even go so far as to say these things are not made via normal means but are weapons made from materials available only in Inferno.

In The Dump, there are enough rumors to rot one’s ears, and if I hadn’t seen the fresco of the Trinity of Realities, a staple of the Vigridian religions, on Rodin’s wall, I would have dismissed talk of him as nothing more than these tall tales. In any case, if I am to fully investigate this man’s secrets, I will surely be able to obtain the truth I so desperately seek.

However, aimless sniffing around in this town is a great way to wind up dead. I’ll have to be prudent and not leave things to chance. 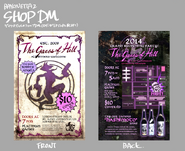 Artwork of a flyer for the Gates of Hell. "Try our famous Hashimoto Sake"

As seen in Bayonetta: Bloody Fate