During the Middle Ages[2]

None
Long before this universe came to be, the first Armageddon split reality into light, darkness, and chaos. It was in this battle that those who rebelled against the light claimed dominion over the darkness. We have but one goal: resurrecting the Creator and reunifying the Trinity of Realities. That shall be the purpose of your sacrifice!― Temperantia, Bayonetta

Temperantia was one of the four Auditio of the Hierarchy of Laguna and is the embodiment of the Cardinal Virtue of Temperance. Acting in order to resurrect Jubileus, The Creator by recovering the Left Eye of Darkness, he sides with the Lumen Sage known as Father Balder.[3]

"Temperantia, the true embodiment of the Cardinal Virtue of Temperance, is often illustrated as an epic giant. Its body rising like a castle, Temperantia possesses two tree-like arms; a composed figure said to illustrate the total reverence in which the Laguna are held by the faithful.

When the true power of the virtue of Temperance is laid upon our world, it is said to come as a tornado, capable of swallowing an entire country. Humans are helpless to guess at the impetus behind Divine Will, whether it be anger or happiness, and are left only with prayers and promises of personal temperance if only the heavens should make the storm subside."

Temperantia is, like all Auditio, colossal in size compared to other Laguna. He appears to be based loosely on a knight, though without legs and his head is in his chest. His arms are attached to his body via an orange light, and rotating golden rings. On the end of these arms are four tube-like appendages each able to fire bullets, which act similarly to hands. Along with parts of his body are hemispheres, each with a pulsing spot in them (that bleed when hit, suggesting he is biological under his armor), five in total, one on each arm, two on the bottom of the main body, and one on his back (With an extra on his lower torso on higher difficulties). His human-like face (a trait among most Laguna) is, unlike other Auditio, the only head he has (Fortitudo had three, Iustitia had seven and Sapientia had five.) His forehead has a large yellow sphere embedded in it.

Temperantia has a wide range of powers. Due to his mechanical nature, each of his fingers can fire bullets, which he would do while holding the rubble Bayonetta is on, and due to the flexibility of each finger, he can hold the rubble and fire at her with only on hand, which came in handy after his first arm was torn off. As a security feature, the teeth-like thing on top of his arms can fires missiles to his target, each hemisphere can project and fire projectiles at attackers, which can be done even when the nerve within them has been destroyed, something the main one that his face hides it can also do. He can also extend his face out of his armor to attack enemies on his body with firing lasers from his head-sphere and grabbing them with the tentacles emerging from his mouth. He can also fly, but the process as to how was never explained. He has natural powers of the wind.

Temperantia is first encountered in Chapter IV: The Two Meet after Labolas and Fortitudo have been dispatched from the battlefield. Taking their fight to the skies above Noatun, Bayonetta summons Madama Butterfly while the Masked Lumen Sage summons Temperantia. The demon and the angel fight each other in the background while the witch and the sage fight within the foreground. At one point, Temperantia will knock out Madama butterfly and begin channeling an attack, if the sage is not interrupted Temperantia will fire his forehead laser at Bayonetta. If the sage is interrupted Madama Butterfly will regain her strength and knock Temperantia down with a headbutt. During the last phase of the fight, Madama Butterfly and Temperantia go hand to hand with each other, culminating in one final blow that causes them both to unmanifest.

Temperantia appears again in Chapter XVI: Truth as a boss in Verse 2, summoning a storm as he appears to fight Bayonetta and Rosa, the two witches fight him from the cliffside of the clocktower, dodging several punches and forehead laser attacks. After defeating the cardinal virtue, he plummets from the side of the cliff.

He appeared in Chapter 5 as an invisible specter conversing with Jeanne before Bayonetta arrives. However, he then disappeared as a battle commenced between Jeanne and Bayonetta.

He finally confronted Bayonetta at an airbase, surrounded by a colossal tornado. Temperantia proceeded to tell her that he was sent to acquire her as a "sacrifice." Bored, Bayonetta merely flung a Fearless angel at the colossal titan, starting the fight. He employed a combination of brute force, high winds, and powerful energies against her, but she proved too agile to be successfully attacked. After breaking the armor on Temperantia's 'fingers', Bayonetta was forced to leap to his arm to avoid a particularly forceful strike from his fist. She then attacked a glowing sphere found near his shoulder to weaken his arm's connection to his main body. Once the energies maintaining the connection were weakened, she summoned Hekatoncheir, a set of demonic hands. The hands then proceeded to pull at Temperantia's arm until it was torn from his body. Later on, Hekatoncheir was summoned once again to pull off his other arm. Though the angel initially had success in fending off Hekatoncheir, the demon-delivered an uppercut to the hapless victim's body, stunning its prey and giving it ample opportunity to tear off Temperantia's other arm. With the titan's arms removed, Bayonetta leaped onto her foe to directly engage him. At first, he summoned a shield to protect his face, but Bayonetta tore apart the spheres powering his shield. In one last attempt to vanquish his foe, Temperantia unleashed a bevy of lasers, fireballs, and wind spirits. However, she subdued him and summoned Hekatoncheir, who then proceeded to pummel him until his face was compressed into his body. Crippled, the maimed Temperantia crashed to the ground. Bayonetta then proceeded to douse his body with petrol from a tanker, and set him ablaze, allowing the demons to drag him into Inferno. 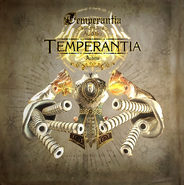 Temperantia's ring, on it is written "Temperance".

Jeanne fighting an up close Temperance in Paradiso - a Sea of Stars.

Temperantia from the boss model gallery

Temperance from the boss model gallery

Temperantia appears before Bayonetta and Rosa in Chapter XVI 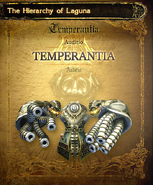 Temperantia represents the element of Air and the cardinal virtue of temperance. His name is Latin is for "Temperance".

Temperantia seems to be based on Archangel Gabriel, which is also the ruler of air in Jewish mysticism (though not in medieval and modern traditions, where he rules water instead). Notably, he is the one Auditio most similar to a human in appearance, a trait Gabriel also shares (he is the only biblical angel to actually be described as resembling a human being instead of an inhuman monstrosity).