Unlike most games in the fighting genre, Super Smash Bros. focuses not on draining opponents health, but rather building up damage percentages and knocking opponents off the stage. Characters fight on a 2D plane so players can attack to the right, left, up, or down. Players are given a series of basic melee attacks, grabs with grapple attacks and multiple throw attack options, a series of different directional Special Attacks, and a single very powerful Smash Attack. Every character in the game has their own special moves and the roster has subsequently been expanded through DLC.

During the final presentation for Super Smash Bros. on December 15th 2015, Bayonetta was confirmed as the final DLC character. Her inclusion in the game is thanks to the Smash Bros. Fighter Ballot where players could vote for their ideal characters to be included in the game. After 1.8 million votes were cast in the ballot, Bayonetta ranked first place in Europe and among the top five in America. Overall, among the negotiable and realizable characters, she ranked first place worldwide.

In-game, Bayonetta is a combo fighter that has the ability to string together a large amount of attacks from a variety of opportunities. Both her Neutral and Strong attacks utilize her combos for hands and feet from Bayonetta 2 and she is able to string these together with Charge Modifiers that shoot at enemies, though the shots will not slow enemies down. Her Special moves, including Bullet Climax, Heel Slide, After Burner Kick and Witch Twist, are able to strike multiple times as long as the first hit is successful. Her combo heavy nature is counteracted by her attacks being slightly slower to start compared to other fighters and the fact she can leave a wider opening to be damaged the longer the combo is. Bayonetta's Down Special acts as a counterattack that triggers the use of Witch Time against the opponent that attacked her, in contrast to the entire game slowing down in the originals. The more her opponent in damaged, the longer Witch Time will last, though its duration will shorten the more it is used. If it is triggered too late, Bat Within will instead activate to reduce the damage she takes.

Bayonetta's Smash attacks summon Wicked Weaves in both forward and upper punches and a downward kick. Her Down Smash is particularly effective when at the edge of stages. Due to Super Smash Bros. being rated E10+, Bayonetta's use of Wicked Weaves and other hair based attacks have required slight censorship in order to fit in the game. Instead of most of her suit disappearing when summoning them, Bayonetta's outfit loses the sleeves of hair whilst the rest only disappears up to her upper thighs. Bayonetta also comes with two versions of her costume, the "A Witch With No Memories" outfit from the first Bayonetta, and the blue costume from Bayonetta 2. This costume also has color variant that represents Jeanne.

Bayonetta's Final Smash is Infernal Climax. When activated, Witch Time is activated to slow down the entire game and allow Bayonetta to attack her foes whilst the Climax gauge increases. Once the gauge is full, she will summon Gomorrah who will proceed to inflict additional damage based on the gauge. Once Gomorrah has finished chewing, if an opponent has over 100% accumulated damage, they are KO'd immediately.

Bayonetta was released on February 3rd, 2016 and came with two costumes based on her default appearance in both of the original games. Her DLC also features trophies of herself, both in her original and alternate costumes, Jeanne, Rodin and Cereza.

The Umbra Clock Tower functions as Bayonetta's stage in Super Smash Bros. for Nintendo 3DS & Wii U. It comes packaged with Bayonetta as part of a DLC released on February 3, 2016.

As a stage, the Umbra Clock Towers functions visually in the exact same way as the prologue of the first Bayonetta. During its rapid descent down the cliff face, other pieces of debris will occasionally drift by, allowing fighters to gain some height before they float off.

At random points during the stage, the Clock Tower will transition into Purgatorio and angels such as the Affinity, Inspired, and Fortitudo make appearances as background elements. They do not interact with the stage at all aside from flying by it.

The Umbra Clock Tower also comes with music from the soundtracks of the original games. The Wii U version has 11 different pieces of music whilst the 3DS tracklist contains only two, as per the usual 3DS stage music list. Both songs in the 3DS version are available in the aforementioned version's Smash Run mode.

The trailer contains several references to the Bayonetta games: 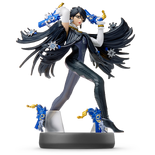 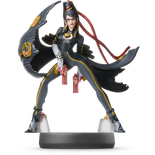