View source
Slash into an opponent with incredible quickness, and deliver a devastating thrusting attack. Can also be preformed in mid-air.― In-Game Description 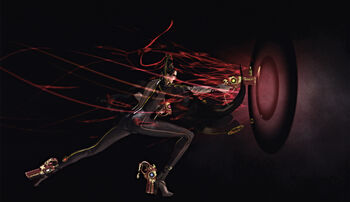 Stiletto is a Technique used for simultaneously closing the distance between Bayonetta and her target whilst also attacking them in both games, Bayonetta and Bayonetta 2. It is an offensive way to dart around the battlefield between enemies and greatly helps Bayonetta to ensure enemies are always within her weapon's reach.

Stiletto can be purchased from Gates of Hell from the beginning of the game onward for 20,000 Halos.

Stiletto is executed by pressing

. The move differs in animation and uses depending on the weapon being used, drastically in some cases.

The actions for these four weapons are nearly identical as only the Charge Modifier causes them to act any differently. Scarborough Fair and the Handguns fire 11 bullets maximum depending on how long

is held. Love Is Blue functions in the exact same way, though it is only able to fire a maximum of 7 bullets when the button is held down. The Onyx Roses simply fire a single shot at the very end of the technique's animation when

is held, making it the weakest of the four small arms. Bazillions fire one of its signature laser beams at the end of the animation, making it the most powerful.

Functioning nearly the same, except for when Pillow Talk is in its charged state, Bayonetta lunges forwards with the sword(s), sliding towards her target as she does. With Chernobog, the blades on the end of the scythe spin as she moves forward and stops, adding on additional hits.

Unlike other weapons, Kulshedra and Alruna's Stiletto doesn't cause Bayonetta to dash towards her target. Instead, both of the whips shoot forwards, zig-zagging towards their targets quickly in wide scope and hitting everything in a line on the front of her.

Regardless of their elemental mode, Durga and Undine function the same, only changing slightly when taking the Charge Modifier into account. Durga leaves behind either leave a burning demonic skull behind or a quick shockwave of lightning whereas Undine will blast out a burst of flame or ice depending on the element chosen.

Similar to the bladed weapons she can also wield, Bayonetta lunges forward with Kafka and takes a swipe at her enemy using the bow itself, swinging in an arc. Unlike other weapons, however, pressing

will cause Bayonetta to swing an additional three times.

Possibly the most useful of the Stiletto uses. When executed, Bayonetta will use the two bazookas to fire behind her, propelling her forwards through the air. Unlike other weapons, this Stiletto is very effective when trying to reach enemies hovering in the air as it will rocket Bayonetta up towards her target.

With Salamandra equipped, Bayonetta spirals forward through the air in a somersault, spinning the blades of the chainsaws around her in forwarding flips toward enemies for multiple hits.

武甕槌 Takemikazuchi sends Bayonetta forward after a brief pause to hold the hammer properly, making it slower to start than other Stilettos. She twirls the hammer around her head as she comes to a stop and then causes it to enter its charged up state if the button is held down.

Very similar in function to Scarborough Fair's Stiletto. It lacks a Charge Modifier but makes up for this by being able to seamlessly combo into its basic punch combos.

In the first game, using Stiletto with Rodin will cause Bayonetta to pull out one of the sousaphones carried by Affinity C and blast a massive pink beam towards her target. The beam can move slowly moved to the left or right using the joystick to sweep it across the battlefield to cause maximum damage. In Bayonetta 2, using Stiletto on Rodin lets Bayonetta summon the wheels of Pain to kick forward towards her enemies. In both instances, the attack is very slow to execute but does massive damage to the opponent.

Stiletto appears as Bayonetta's dash attack, based upon its gun incarnation.