Sloth, also known as the Embracer of Extremes, is a humanoid demon with six arms that serves as one of the enemies that Bayonetta will encounter deep in Inferno in the second game, Bayonetta 2. Acting as a demonic counterpart equivalent to Grace & Glory, Sloth is one of the most challenging enemies to appear in the game thanks to its relentless speed and resistance to being staggered.

"A demon who lies in wait for pious believers to be granted entrance to Paradiso so he can slice them apart and cast them to Inferno during their ascension.

The six swords sheathed in his back represent gluttony, profanity, doubt, idiocy, rage and arrogance. Each blade awakens feelings in victims of its respective sin when cut.

At first, those who witness Sloth are filled with joy to reaffirm the truth of their religion. In the next moment, they are filled with sadness as they are tossed to the darkness of hell. Not only concerned with humans, Sloths have been responsible for countless fallen angels."

First appearing during Chapter X, Sloth is a challenging fight on par with some of the smaller boss encounters. Utilizing a selection of 6 crimson blades as its weapons, Sloth is ironically one of the fastest attackers in the game. With various slashes that are executed with a wide range on the ground and in mid-air, Sloth's attacks are luckily telegraphed to allow the use of Witch Time. It becomes a valuable crutch in order to take Sloth down as it will usually dodge most of Bayonetta's attacks unless Witch Time is activated.

Initiating a Torture Attack on Sloth will summon Hydra. The demon's tentacles appear below Sloth before snaring it in a twisted coil of each serpent-like limb. Squeezing it tightly until Sloth's limbs are literally torn away, the damage from this Torture Attack amounts to one-third of Sloth's health. If it is not successful in killing it, Sloth will take a moment to regrow its destroyed limbs before returning to battle. Defeating Sloth in this manner gives a chance for it to drop its swords as a usable weapon.

Outside of its appearances in Inferno, Sloth appears in two of the Witch Trials. In Witch Trial III, it must be fought alongside several Fury while the battle in Witch Trial V pairs him with Grace & Glory.

Because of Sloth's constant dodging against regular attacks, fast-moving weapons like Rakshasa are highly recommended when Witch Time is not active depending on the level of the game. If able to activate it successfully, high-damaging weapons such as Salamandra are recommended to deal with serious damage while the demon is in a vulnerable position. Alruna is also useful during Witch Time when using its Charge Modifier, allowing Bayonetta to close any gaps between herself and Sloth and momentarily stun the demon by slamming it into the ground. 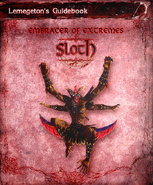 Sloth's model. Even a demon can be sassy.

A close-up of Sloth's face. 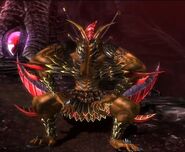