N/A
Scolopendra, also known as the Eradicator of Paradise, is an immensely long and slithering centipede demon. Appearing in both games in the series, Scolopendra acts as both an ally and eventual enemy to Bayonetta on her journeys.

"A vile centipede hailing from Frejentonta, a river of boiling blood in the depths of Inferno, rumors speak of its body exceeding ten kilometers in length.

Moving unlike anything its size, its deftness allows it to wrap around and constrict its prey in the blink of an eye."

Scolopendra is a summonable demon during the events of the first game, appearing for the first time when Bayonetta fights Iustitia. After beating the angel down, she summons Scolopendra from the ground where it proceeds to wrap its long body around Iustitia's form. It squeezes tighter and tighter until eventually crushing the angel within its grip, reducing it to a bloody mass.

Scolopendra makes a later appearance during the fight against Father Balder where it attempts the same tactic it had used before. Though able to crush the shield that Balder conjures around himself, the Sage causes an explosion of magic and rips Scolopendra's body apart, breaking the summoning.

Scolopendra appears once during the anime adaptation, though this time being summoned by Bayonetta to destroy an Irenic that is chasing her on Route 666. Much like in the game, it wraps its body around the angel and slowly crushes it into submission.

Scolopendra doesn't appear in the sequel until Bayonetta manages to enter the depths of Inferno. Surrounding the demonic whirlwind that leads into Johnson Forest which surrounds Alraune's palace, a swarm of Scolopendra attempts to lunge at her as she flies towards her target. Though swirling in circles and different formations, she is able to evade her former summon safely.

Jeanne's underwater Beast Within is called 'Centipede Within', a form that slightly resembles Scolopendra, colored red and wearing a white tiara.

Scolopendra resembles a giant centipede. When summoned and encountered it has skulls adorning the back of its head and spikes running down the length of its body. Scolopendra has multiple blue eyes and possesses a set of powerful mandibles/jaws, even though it never uses them in-game. Though unable to be seen clearly when it is summoned in the first game thanks to Bayonetta's hair, the sequel shows that Scolopendra has a multitude of legs down its body too.

Scolopendra borrows its name from the same genus of centipede that belongs to the scolopendridae, a family of large, venomous centipedes that are very aggressive and can grow up to 30cm in length. The mukade (another genus to this centipede family) are represented as symbols of darkness and evil in Japanese folklore. In one story, the mukade are said to have escaped from hell during the Great Kanto Earthquake in Honshū in 1923. 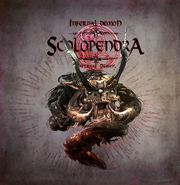 Artwork of Gomorrah and Scolopendra for the first Bayonetta.

Scolopendra as it appears in-game. 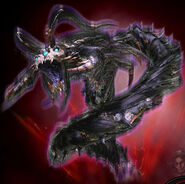 Scolopendra, summoned by Bayonetta/Zero in the demons model gallery.

Scolopendra, summoned by Jeanne in the demons model gallery.

Scolopendra and Irenic in Bloody Fate. 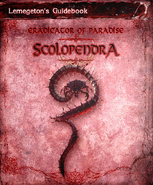 As seen in Lemegeton's Guidebook in Bayonetta 2.

Scolopendra as it appears in Bayonetta 2.

Bayonetta falling through spirals of Scolopendra in Bayonetta 2.