View source
watch 01:09
'Bayonetta' Lore: Scarborough Fair
Do you like this video?
Play Sound
Built from an alloy the Devil himself would kill to get his hands on. Don't break these, cause they're one of a kind.― Rodin

Scarborough Fair is the name of Bayonetta's signature and one of her favorite weapons from the first Bayonetta game, a set of four large-caliber handguns that act as her default weapons. They are the only weapons that don't need to be unlocked by collecting Golden LPs, through clearing certain difficulties, or by completing a certain task. They are an all-around weapon and are very popular with both newer and veteran players.

"Crafted by the famed demon-smith Rodin, these four guns have been crowned with the names Parsley, Sage, Rosemary, and Thyme. Pushing Bayonetta's magic to its limits, these guns' rate of fire and stopping power are incredible."

"Crafted by the famed demon-smith Rodin, these four guns have been crowned with the names Parsley, Sage, Rosemary, and Thyme. Pushing Bayonetta's magic to its limits, these guns' rate of fire and stopping power are incredible. The durable framework of these weapons makes them able to withstand any amount of power channeled through them, including Wicked Weaves--powerful attacks by the Umbras that use hair to summon demons."

According to Muneyuki "Johnny” Kotegawa's blog, who designed and modeled all of the weapons in Bayonetta, he approached the design of Scarborough Fair as well as the game design in general based on three criteria. First that the lead character was female, second that she was a modern witch, and third the guns would have to be fired with both hands and feet. After a spirited debate with co-designers Mari Shimazaki (a.k.a. Shimako) and Hideki Kamiya they decided on a color balance based around pitch-black clothing, white skin, gold ornamentations, and the red ribbon accent. It was then that it was decided that the guns in her hand should be red which would not only compliment her color scheme but also allow the player to keep better track of her limbs during the fast-paced action combat.

With all that in mind, Kotegawa developed several weapon designs based on real-world guns so that the end product no matter how fantastic would still remain convincing. After working on various designs, co-designer Kamiya showed a preference to the gun based on the Derringer. Kotegawa had believed that Kamiya selected the Derringer because it was a gun capable of rapid-fire, simple, and rugged, however when he asked his co-designer about the selection the answer was "This design would look hot in a girl's hand." The name "Scarborough Fair" is a reference to an old English ballad that focuses on four herbs; Parsley, Sage, Rosemary, and Thyme. The herbs became the names of each individual pistol with the idea that witches and herbs are closely linked.

Accordingly, Bayonetta's guns each have their name on them, with a complimentary saying. On each gun it says "Scarborough Fair, Made by Rodin" and under that, the name of the gun. In her right hand, green jeweled is Parsley, which says "Parsley, ever joyous". In her left hand, red jeweled, is Sage, saying "Sage, ever strong". Her right foot has Rosemary, blue jeweled, saying "Rosemary, ever reminiscent", and her left foot has Thyme, white jeweled, saying "Thyme, ever courageous". All of which are under Rodin's Copyright.

Bayonetta acquires Scarborough Fair by default after completing the Prologue.

Bayonetta can acquire Scarborough Fair by beating the game on 2nd Climax Difficulty and purchasing the Super Mirror, which contains specific outfits and weapons from the first game.

As the basis for Bayonetta's combat during the initial conception stages, Scarborough Fair acts as both a melee and long-range weapon. Using Dodge Offset will cause the guns to fire numerous rounds as Bayonetta flips out of harm's way.

All bullets fired by Scarborough Fair will ricochet off surfaces at least once and attempt to hit nearby enemies. When compared to other weapons available in the game, their damage is a bit low, but their flexibility of being efficient in melee and ranged combat make them quite valuable throughout the game's duration.

Bullet Climax: Bayonetta will stand motionless and take aim whilst firing off numerous rounds, the player being able to manually aim at various enemies on the screen around her.

Charge Modifier: Holding down the corresponding attack button will cause Bayonetta to fire off five shots before transitioning into her next attack. This allows the Scarborough Fair to accumulate combo points easily on smaller or slower Angels, or deal damage at safe distance from more dangerous enemies.

Notable Combos: Due to Scarborough Fair sharing its move-set with many weapons in Bayonetta 1, these combos can be executed with most of them, though there are some exceptions.

Is the fastest way to execute a hard-hitting Wicked Weave without expending Magic Power. It is effective against virtually all enemies and all bosses.

are the two most consistent launchers in the game, as they end in a launching Wicked Weave that will send most enemies into the air, where they are less aggressive. Jump Canceling the last

as the Wicked Weave is summoned and immediately executing an After Burner Kick is a dependable way to extend combo chains and isolate enemies.

Scarborough Fair acts in the same way as its incarnation in the first game, giving Bayonetta her move-set from the original game, although it has been tweaked to include particular finishing animations from Love Is Blue.

Bullet Climax: Functioning identically to Love is Blue's Bullet Climax, Bayonetta stands motionless and takes aim at nearby enemies with powerful shots from either hands or feet. Unlike in the first game, Bayonetta will automatically fire at any surrounding enemies. If Bayonetta has available Magic power, the bullets will be charged up, and the Bullet Climax can be extended until her Magic runs out.

Charge Modifier: Like in the previous game, holding down the corresponding attack button will cause Bayonetta to fire off several shots before transitioning into her next attack. These bullets do significantly less damage to larger enemies and bosses, with most bosses outright blocking them.

Wicked Weaves & Umbran Climax: Like Love is Blue, Scarborough Fair is capable of summoning a wide range of Infernal Demons to act as combo finishers, all dependent on the particular combo being performed. The primary difference between the two is Scarborough Fair's ability to chain multiple Infernal Demon attacks together due to is using combos from Bayonetta 1, which may or may not have been designed with Umbran Climax in mind. The prime example is

, Jump or Dodge cancel the kick animation, and immediately execute

. This combination of attacks can summon Madama Butterfly, Hydra, and Labolas in a single Umbran Climax, a feat that no other weapon is capable of performing.

Comparison to Love is Blue: In a direct comparison, Scarborough Fair performs better in almost every regard due to it having a less "flashy" move-set and consistently higher damage, both in and out of Umbran Climax. This gives it an advantage on higher difficulties and especially against humanoid bosses like Masked Lumen. The

combo, in particular, is much faster and deals more damage than the new version that Love is Blue has. In addition to this, many of Scarborough Fair's dependable combos from the first game have been made faster and more fluid.

However, due to Bayonetta 2's Feet move-sets generally being much better than the ones present in Bayonetta, Scarborough Fair still lacks a diverse move-set when equipped to the feet slot. This can be resolved through a number of ways, such as equipping Love is Blue, to the Feet, bringing the strengths of both weapons to bare.

In Bayonetta: Bloody Fate, an anime film adaptation of the first game, Bayonetta initially wields a set of four red guns named "Elfin Knight". They appear to be based on earlier concept art for the Scarborough Fair weapons as the barrel shape and detail are almost identical. In the anime, Bayonetta uses these guns until her first encounter with Jeanne. The battle subsequently destroys the weapons to the point where they crumble to pieces. In her final battle with Jeanne, Bayonetta then receives Scarborough Fair from Rodin as an upgrade for the destroyed Knight. 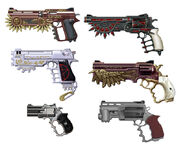 The texture file for Scarborough Fair, allowing us to read the engraved text better.