None
Thanks to his efforts, this town has become a source of strength and we've gained a foothold strong enough to orchestrate the Creator's resurrection. All that remains is awakening the Left Eye, and uniting the Eyes of the World. Then the new era of creation shall arrive!― Sapientia, Bayonetta

Sapientia was one of the four Auditio of the Hierarchy of Laguna and Cardinal Virtue of Prudence and Controller of Seas, is an enemy boss in the first Bayonetta game, the last Auditio seeking to recover the Left Eye of the World and revive Jubileus, the Creator.

"Artists have often depicted the Cardinal Virtue of Prudence, Sapientia, as a marine animal roaming the depths of the sea. This is likely due to the human disposition to characterize the sea as the source of all life, a veritable fountain of prudence and wisdom.

It is also thought that Sapientia is responsible for the rise and fall of the tides, and natural phenomena such as tsunamis. The grand idea that the living seas could be nothing other than the Divine Will at work is actually evidence of Sapientia's narcissism, even amongst the other Cardinal Virtues.

When a man born as a slave led his people to freedom from ruling oppression, it is said that it was only Sapientia's favor that parted the seas and allowed for their escape."

Sapientia is first seen accompanying Jeanne in her confrontation with Bayonetta on a plane that had captured Cereza. When Sapientia catches up with Valkyrie, the lack of control of Jeanne and constant reminding of their objective causes Jeanne to lash out at him, forcing him off the plane to confront Bayonetta personally. However, Sapientia shoots a fireball at the ship, causing it to fall into the ocean.

He has seen again after the plane crashes into the ocean, damaged beyond repair. A helicopter flown by Luka rescues Cereza, leaving Bayonetta behind. Moments later, Sapientia appears out of the water, challenging her to battle. Bayonetta proceeds to use a panel from the airplane as an impromptu surfboard to fight him. After wounding him, Bayonetta summons Phantasmaraneae. Sapientia notices his danger and attempts to flee, but is stopped by Bayonetta, who proceeds to force him toward Phantasmaraneae using Madama Butterfly. After repeated attacks from Phantasmaraneae, Sapientia creates a vortex in the ocean, leading to one last fight in the whirlpool. Upon his defeat, Bayonetta summons a giant Phantasmaraneae, which sucks Sapientia further down the vortex. He struggles to escape but is drawn in by Phantasmaraneae's breath. He falls onto a spider web and proceeds to have his body ripped apart by Phantasmaraneae's children. In his last moments, he laughs at Bayonetta, considering her cluelessness. He is then taken into the depths of Inferno.

Sapientia's clone appears before Bayonetta in an elevator shaft of the Ithavoll building shortly after she destroys Justice, and is the last clone fought in the game. He uses a different tactic to fighting her but is defeated nonetheless. After being defeated he will fall off the side of the building and be impaled by several sun arch spikes near the elevator shaft. Instead of two sets of three rocket launchers on his haunches, he has two sets of one. Additionally, he only fires them when you are quite far away.

Sapientia reappears in Chapter VII: The Ark though minor, being summoned by the Masked Lumen inside to gain an upper hand in his fight with Bayonetta inside Insidious's body. In response, Bayonetta summons Hydra to fight him. He serves as a stage hazard in their fight, firing missiles out of his mouth or slamming his front claw onto the arena. As Bayonetta defeats the Lumen Sage, he orders Sapientia to fire a barrage of missiles towards her, which Hydra reflects by roaring at them. Sapientia then tries to fire its quadruple laser at Hydra, which it again deflects by reflecting the lasers with the blades on its forehead. The lasers then heavily scar Insidious' innards, which damage the weakened demon enough for it to explode.

He then reappears during the Witch Hunts in Chapter XIV, ambushing Rosa and Bayonetta as they navigate the wartorn streets of Vigrid in the Umbran Armor. He slams his front arm down on Bayonetta as she approaches a large gate, which makes her activate the armor's jets and jump into the sky to avoid it. He prepares to fire his laser at her, until Rosa jumps out of her mech and summons Hekatoncheir to punch him the face and then restrain him, thus allowing Bayonetta enough time to cross the passage above. The first pair of Hekatoncheir's arms disengage and proceed to repeatedly punch him in the face before uppercutting him into a different area. He reappears again to fight Bayonetta and Rosa personally, this time with heavily increased speed and aggression. Eventually, he is defeated, and in a last-ditch attack, he fires a barrage of lasers at Bayonetta, who deftly avoids it and zooms past him. Then she grabs his tail and proceeds to spin him around, before throwing him at a Resplendence, which completely obliterates Sapientia's body.

Sapientia is an angel of the high order, sent to combat Bayonetta. His appearance is that of an armored dragon at first, though toward the battle's end, his horns and wings are destroyed, and he takes on the appearance of an oversized reptile. He also has porcelain faces on his legs and a face on his main head, near his bottom chin. His face parts seem reversed, as his "eye" is near his chin, while his mouth is located on his forehead. Like most of the powerful angels, he is adorned with lustrous metals and jewels. Strangely, his metallic appearance is never lost, as usual, the angels reveal musculature when they are seriously wounded; but he retains his machine-like appearance, even after Bayonetta dismembers him. He also has to turn silver fans on his flat joints (beneath his halos), and two silver turbines on his neck.

Prudence, like his other cardinal clone companions, is colored silver and green compared to his template cardinal Sapientia, the wings on his back a more curled and smaller, he lacks horns near his head, smaller crown, has no human faces on his legs, and his silver fans and turbines seem inactive. His legs also host only one rocket gun launcher compared to Sapientia's two guns per leg.

He is a fearsome beast whose natural element is that of water. Not only is he a powerful swimmer, but he can float on water, his mass notwithstanding, and can generate a vortex the size of a soccer field in the water, drawing his prey to the bottom. He can also use a variety of energy blasts from various tendrils (including, on close inspection, rocket launchers just in front of his tail) and can shoot fire from the faces that are attached to his legs. Finally, he will attempt to devour Bayonetta either by swimming underneath her and lunging upwards or leaping clear out of the water in the manner of a shark.

Sapientia represents the element of Water. His name comes from the word sapience, which means "to have judgment". The English word "sapient", which means "showing wisdom and judgment", is also derived from the same word. As its title "cardinal virtue of prudence" suggests, it's based on this virtue.

Sapientia may be based on Archangel Raphael, which is also associated with water in Jewish mysticism (though not in medieval thought, where he is the ruler of air). Notably, his description as governing sealife echoes Raphael's association with the fish. 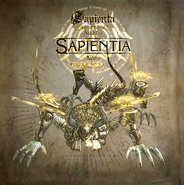 Sapientia in the boss model gallery.

Prudence in the angel model gallery. 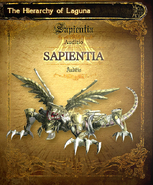 Sapientia being held down by Hekatoncheir

Sapientia before he is fought in Chapter XVI

Sapientia being spun around