Salamandra is the name of a pair of chainsaw-swords in the second game, Bayonetta 2, that can be equipped to either the hands or feet slot. Much like the chainsaw weapon received from the Harmony Torture Attack in the first game, they can be used in both melee strikes and prolonged sawing actions for extra damage. They are gained after collecting the three fragments of the Matthäus-Passion LP, and an alternate pair can be purchased from the Gates of Hell afterwards.

"Chainsaws that resourcefully use every inch of the infernal dragon Salamandra. Its sharp scales were forged into the weapons' teeth, and its heart supplies their engines.

At full throttle, their teeth easily rip apart even the hardest of iron skin and ravage deep through flesh below."

All three pieces of Salamandra's Gold LP can be found in Chapter X.

Salamandra is fairly unique among Bayonetta 2's repertoire of weaponry. Having a quick 4-hit combo chain, rather than the typical 5, with a set of wide cleaving attacks that come out quite fast that propel Bayonetta towards her target, and dealing damage that's similar to Rakshasa. However what makes Salamandra really shine is the unique Charge Modifer.

Charge Modifier: Upon striking an enemy with nearly any attack, even including the Stiletto and Heel Slide techniques, Salamandra will dig into the opponent, slowly cutting through them for additional damage, during which the chainsaws will begin to glow orange, and then crimson. If the held button is released and pressed again just as the crimson glow reaches its brightest, Bayonetta will quickly follow with a quick and powerful bonus slash.

Executing this unique Charge Modifier perfectly results in extremely high damage per second, higher than any other basic melee weapon in the game, and also quickly grants mana, filling a pearl on Bayonetta's bar each time it is executed, in addition to the typical amount of mana gained from normally striking enemies. For an accurate damage comparison, an electrically charged 武甕槌 Takemikazuchi kills a basic Acceptance in 4 hits, while a perfectly timed Salmandra combo will kill it in 2.

Bullet Climax: Bayonetta will spin with both Salamandra outstretched, dealing significant damage. If the bullet is held and then released at the proper time, she will quickly spin an additional time, carve everything around her in a larger area for more damage.

Wicked Weaves & Umbran Climax: Unlike most of the other weapons in the game, Salamandra does not have proper Wicked Weaves when used in normal combat, instead relying on its unique Charge Modifier to deal exceptional damage and stagger. During Umbran Climax however, the weapons chain-blades are greatly extended and deal increased damage. If utilized with the aforementioned Charge Modifier they are capable of bursting down even powerful bosses with unmatched speed.

Additionally, whenever Salamandra is equipped on the feet, the player will skate around on them like Odette instead of walking, increasing movement speed by roughly 20%. Unlike Odette, however, Salamandra does not reduce friction, and cannot be used to slide during dodges or combos.

Agni is Jeanne's equivalent of the Salamandra. The chainsaws are colored entirely white to Jeanne's preference.

"Chainsaws containing the spiritual energy absorbed from the god who controls all flame. The fire that constantly flows from this weapon transforms into sharp teeth that can sear anything apart."

Bayonetta skating with the Salamandra 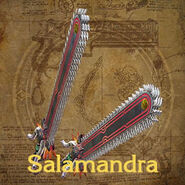