View source
watch 02:24
'Bayonetta' Lore: Rosa
Do you like this video?
Play Sound

Mummy (By Adult and Young Cereza.)

Tiger Within
Falcon Within
Hornet Within
Cobra Within
Balder. Please take care of Cereza... our dear, sweet child will awaken to her potential... She will awaken to the Eyes of the World... ― Rosa's last words.

Rosa was the immensely skilled and powerful Umbra Witch who was both the wife of Balder and beloved mother of Bayonetta. Imprisoned for falling in love with a Lumen Sage and birthing a daughter from their union, she was one of the figures responsible for inadvertently setting forth the Clan Wars.[1]

Rosa first appears in Bayonetta during flashbacks and in Bayonetta 2, makes her full appearance and is a playable character in both story mode and Tag Climax.

Replacing King Zero as the third playable character, Rosa can be unlocked in Bayonetta 2 by completing the game on 3rd Climax difficulty (Hard), after which she will become playable in both story mode and Tag Climax. She can also be unlocked earlier at her cheat door found at the start of Chapter 2, this small door is along the right side after the bridge/Muspelheim and just before the small plaza, it has an ornate decoration above it and is next to a breakable green restaurant menu. By tapping three times on the door via the touch screen to make the screen zoom out enter Up, Down, Up, Right, Left, X, B, Y, A to get a purchase message. It costs 1 Million Halos to unlock her.

Rosa also has her own unique Wicked Weaves to represent her pact with Madama Khepri. As with Jeanne, Rosa has her own differences in gameplay:

Because of her restrictive weaponry, Rosa has no access to Umbran Fragrances, but unlike Jeanne's lack of fragrances, Rosa has no additional costumes to wear and no Super Mirror to unlock, leaving her permanently with her default outfit. Rosa also uses Bayonetta's moveset from the first game.

Rosa makes an appearance as a boss alongside Balder in Tag Climax as the thirteenth secret verse card. This card can only be unlocked through random play within the Tag Climax mode.

In Bayonetta, Rosa is only seen in Bayonetta's memories. Initially, before her imprisonment, she wears a long black dress and boots and a hood that covers up her head and face, the silhouette in a manner similar to Bayonetta's beehive hairstyle. In concept art, her hair is light brown. She also wears a pair of butterfly motif glasses which she eventually gives to her daughter.

In Bayonetta 2, Rosa sports a new design that is an extension of her prison outfit, named the Robes of Banishment. Retaining her butterfly glasses, she now sports chains around her wrists and chest, with various loose belts on her limbs. The chains are worn as a reminder of when she broke the laws of the Umbra as she had previously worn them during her imprisonment in which they suppressed her magical power. She is shown to be able to use these chains to restrain enemies in cutscenes. She also wears a cloak that is split into two like a pair of wings and the sleeves around her wrists and feet resemble the curves of a batwing. The full description in Tag Climax explains that it is woven from her own hair like Bayonetta's outfit.

Falling in love with Balder, Rosa would marry the Lumen Sage and break their clan's sacred tenets. Rosa would later be given a special gift from him that symbolizes their love and both of them conceived a child. After the birth of Cereza, Rosa faced punishment and was imprisoned as a result, whereas her husband was exiled from his clan. Raising Cereza from her jail cell, she would give her the Umbran Watch as part of her birthday present and sing Fly Me to the Moon to her daughter every day as she slept outside her cell.[1]

After being grievously injured during the beginnings of the Witch Hunts supposedly instigated by her husband, Rosa once more reunites with Balder after twenty years. Balder is with her, explaining that he had been tricked by the forces of Paradiso into triggering the Witch Hunts much to her relief. Seeing Balder about to be struck, Rosa suddenly takes the hit by a figure from the shadows. In her dying moments, she tells Balder to promise her to watch over their daughter and passes away.[2]

In the anime adaptation, Rosa's fate and history are similar to the one she did in the first game.

Her death is also expanded upon where Bayonetta and Jeanne both find her amidst the ruins of their home and piles of dead Witches. As Balder floats menacingly over the scene, having seemingly ordered the deed done himself, Rosa pleads with her daughter in her last moments to set Balder free from the madness that has gripped his soul upon being exiled from the Lumen Sages, unaware of the truth of his corruption from an outside force. She gives Bayonetta her lipstick and passes away.[3]

Due to Loptr's manipulations of time by bringing Balder to the past as well as Loki's own from an accident using the Remembrances of Time, Rosa's past history is slightly changed.[2]

As Bayonetta arrives five hundred years prior during the Witch Hunts and the Umbra Witches's fight with the forces of Paradiso, she stumbles upon Rosa, who was freed from her confinement to battle alongside her clan at the threat of their destruction. Dispatching the angels easily, she is surprised to recognize her daughter as an adult. With more angels surrounding them, the mother/daughter duo fend off the angels. As Worships appear, Fortitudo also emerges and engages the two witches. With teamwork, both of them manage to throw Fortitudo out of the battlefield.[2]

Moving throughout the Umbra's home in Vigrid, Rosa and Bayonetta later call upon the usage of the Umbran Armor, fighting off the both powerful Auditio known as Sapientia and Iustitia as well as the Worships. As they both reunite after their battle with Iustitia, Rosa and Bayonetta witness Fortitudio destroying the Umbran Clock Tower, the mother distraught at the symbol of the Umbra way and reaffirms that the coordinate Witch Hunt attack on the Umbra and all that they stood for couldn't have been Balder's plan The both of them would jump to get out of harm's way, finding themselves fighting angels amidst the top of a falling ruin of the Clock Tower. After an attack from an Inspired, the ruined piece is destroyed and Rosa is separated from Bayonetta.[2]

Finding herself in Crescent Valley, she goes to the sanctuary where she encounters Loptr, who fatally injures her as part of his plan to originally manipulate Balder. Balder and the older Bayonetta arrive too late, Balder failing to land a strike on Loptr as he disappears into the shadows. Balder finds out that Loki, who appears similar to Loptr's young form, is not responsible for her fatal injury. As Bayonetta pleads for Balder to travel to her time, Rosa, in her dying wish, asks for Balder to protect Cereza as she will awaken to her true potential as the Left Eye of the Eyes of the World.[2]

As Balder and the older Bayonetta return to their time, moments after, Cereza and Jeanne stumble upon her as she passes away and her soul was dragged to Inferno.[2]

Rosa was a formidable and powerful fighter, capable of dispatching and physically overpowering multiple groups of Affinities with incredible ease with both hand-to-hand combat and even using her chains as a weapon for decapitation. She also proved strong enough to lift open one of Fortitudo's dragon heads like her daughter and from her assistance throw the angel overhead. She is also capable of dealing higher striking damage compared to both Bayonetta and Jeanne (in-gameplay).[2]

Immensely skilled in Bullet Arts, She is described as possessing fighting technique that has surpassed other Umbra Witches and leaves even the likes of Bayonetta speechless.[4]

As an Umbra Witch, Rosa was capable of performing magic.[2] Although the chains on her suppress her magical power, it is known that her skill with the Dark Arts (or Umbran Arts) was so powerful that the suppressing chains could not properly contain her power.[5] Among some of the magic she displayed include the capability of using levitation. As with all the Umbra, she can see into Purgatorio and enter into the parallel realm.[2]

As an Umbra Witch, she is capable of summoning various demons:

Her most powerful summon (and demon in which she is in a pact with) is that of Madama Khepri, a goddess of Inferno. Due to their pact, she is capable of gaining almost infinite knowledge of time and the secret techniques to control it.[6]

Concept art of Rosa in Bayonetta.

A younger Rosa and Balder with their infant daughter.

Rosa sitting in her prison cell, singing to Cereza. 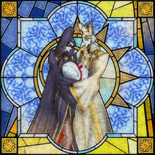 Rosa and Balder with an Infant Cereza

Rosa appearing to Balder in his final moments, in Bloody Fate.

Rosa in her new outfit for Bayonetta 2.

Rosa in the Records Of Time section of Bayonetta 2.

Bayonetta and Rosa fight together.

Rosa jumps into the air to summon Hekatoncheir

Rosa and Bayonetta landing at the clock tower

Bayonetta and Rosa fight together again

Rosa's death, at the hands of Loptr.

Light and the Dark, Balder and Rosa's Verse Card