Resplendence is a Cybrid Angel that appears in Bayonetta 2. It belongs to the First Sphere: Thrones in the Hierarchy of Laguna and, along with Worship, is one of the rarest and largest angelic enemies in the game. It only appears in the Records of Time and in Chapter XIV.

Resplendence is unique in that it only appears in the background of the level and cannot be fought directly. Bayonetta does attack it by throwing another boss at Resplendence, but the larger angel appears to remain unharmed. When Bayonetta self-destructs her Umbran Armor to escape the grasp of Iustitia, the colossal angel is taken down in the explosion.

Resplendence takes on the appearance of a gigantic, angelic airship with golden metallic wings. Adorned with holy decoration and multiple faces, it is the largest angel amongst the forces of Paradiso, its face alone dwarfing even Sapientia. It is also incredibly strong as the impact between itself and Sapientia merely scratches its surface.

Given its only appearance during a massive angel invasion of the Umbra Witches' sanctuary, it can be assumed that Resplendence acts as an angelic version of Insidious, holding angelic forces on board like a warship.

"Forged by divine hands using the brilliance of the sun itself, Resplendence resides in the First Sphere class Thrones, ranked third in the angelic hierarchy.

Resplendence's radiant form can overturn the laws of nature, turning night to day as it simply peers over the horizon. Among those who gaze into its luminous presence, the pious weep and bow before it, while it sears the eyes of those who lack faith, throwing them to the ground in submission."

Though not fought directly, Resplendence does reveal that it has the ability to fire a massive beam of explosive flame from its central mouth. However, this ability only ever activates during non-playable cutscenes meaning no movie cutscenes. 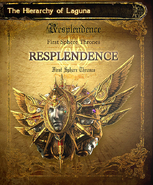 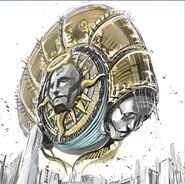 Sapientia thrown at Resplendence
Add a photo to this gallery

Retrieved from "https://bayonetta.fandom.com/wiki/Resplendence?oldid=46637"
Community content is available under CC-BY-SA unless otherwise noted.