Resentment, also known as the Swindler of Progress, is a large, snake-like demon who has the left hand of a crocodile and a right hand composed of a lance with two brains as a pommel and a long row of spikes running down the blade, the lower half of a snake, a ring of armor floating on its torso, a dirty robe necklace made of filthy bloody Lumen Sage skulls, and a Chinese lantern as a head with a large maw that serves as one of the enemies that Bayonetta encounters as she journeys through Inferno in the second game, Bayonetta 2. Though rare to encounter, Resentment is one of the few enemies that can cause an instant death if players are caught unaware.

"It is said that a curse is cast upon the families of those who die an unnatural death while bearing feelings of hatred and ill will.

Resentment, born from the sludge of Inferno, is an exact manifestation of those bitter, repressed emotions inside humanity.

Once it has chosen a victim, it will follow them forever, no matter the distance, until it can tie them down and make them feel the weight of the pains of hell. Its tenacity is far beyond that of other demons of Inferno, and Resentment is said to have the ability to open the Gates of Hell through sheer willpower.

Witnessing this demon gives testimony to the truly unthinkable power of grudges humans find fit to hold in their hearts and never release."

At a further range, Resentment will attempt to fire a charged beam at Bayonetta. If it succeeds in hitting her, it will transform her into her child incarnation, in a similar vein to Jubileus from the first game. This is where the true danger posed by Resentment lies. Once Bayonetta has been hit, Resentment will slowly begin to move towards her. If it manages to get close enough, it will draw Bayonetta into the 'hood' on its head and swallow her whole, causing an instant Game Over. But if the player has powered up their Umbran Climax, the magic will turn her back into her original form.

If a Torture Attack is initiated on Resentment, Bayonetta will summon Baal, who will slam the demon into the ground for a while with her tongue before instantly drawing Resentment into her mouth and swallowing it whole.

Resentment can also drop a demonic weapon upon death. The spiky, skull-adorned pole attached to its right arm. This weapon functions as a whip and its attack is very similar to Kulshedra's bullet climax which involves spinning it around in great distance.

Resentment is rather sturdy and resistant to attack as most of the demonic enemies in the game are, but is also not as quick when compared to other enemies such as Hideous. Because of this, it is recommended to make use of Rakshasa's speed and Salamandra's damage output when dealing with Resentment. 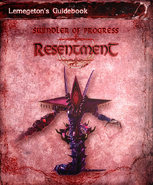 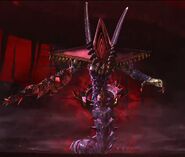