When the Trinity of Realities was created.

None
Queen Sheba is the often called infernal demon that controls Inferno after the creation of the Trinity of Realities.[1] She appears in the first game as a summon from the Umbra Witch Bayonetta used to defeat Jubileus, The Creator.

"When the cosmos was split into light, darkness, and the chaos in-between, the incredibly powerful Sheba was born alongside the darkness controlling the world of Inferno. She lives in the hellish land, and is often classified as a demon; however, the full details of her existence are unknown.[1]"

Sheba was born as the Trinity of Realities formed from the First Armageddon and along with the creation of Inferno.[1]

After beating Jubileus into submission, Bayonetta then summons Queen Sheba. Sheba materializes for her summoning to deliver the final blow to Jubileus. Kissing her hand, she then sends forth a powerful punch in which flung Jubieus's soul into the sun, leaving her body to be a husk of itself.[1]

Sheba's role in the anime movie, Bloody Fate, different from the game counterpart, with her being summoned by Bayonetta and Jeanne as the final demon to combat Jubileus and Balder, the demon and goddess are relatively matched, bringing their battle far out of the solar system. Bayonetta summons a colossal version of the spike pony used in the Joy torture attack and then gives the queen a rose-ornamented whip to ensnare Jubileus and trap her on the torture device. Jeanne then gives Sheba her gun, which passes through a magic Umbran seal to match Sheba's size, the queen wraps her summoning hair around the gun, changing it into a demon-styled cannon-like gun. After Bayonetta shoots Balder, Jeanne gives the signal for Sheba to shoot Jubileus, destroying the goddess forever.

Queen Sheba resembles a female with long strands of "hair" with skulls adorned on the top portion of her "hair". She has red eyes, long red nails, and a skull on the back of her hand.

Much of Sheba's power remains unseen, although her power rivals that of Jubileus, the strongest out of the 3 gods; Sheba then defeats a severely weakened Jubileus. Sheba is capable of sending a punch measured in beyond 900 "infinitons" in which its effects include separating the weakened Jubileus's soul from her body towards the Sun.[1]

In the anime movie, Sheba can perform large energy blasts, possess the necessary strength to throw Jubileus with ease, move at high speeds, and is able to summon Wicked Weaves-like limbs towards her enemies. With the assistance of a witch, she is able to draw a gun and can shoot bullets in which could decimate both Jubileus and Balder.[2] 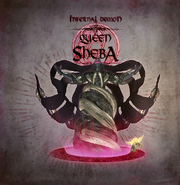 Queen Sheba from the artwork gallery

Sheba as she is summoned by Bayonetta

Sheba kissing her fist, before punching Jubileus' soul out of her body 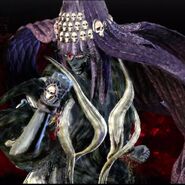 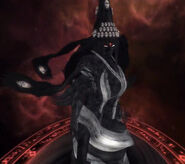 Close up of Sheba's head

Sheba counters Jubileus with her own magic