Pride, also known as the Enveloper of Flame, is a large, red-colored mechanical demon enemy with two burning gears doubling as arms in Bayonetta 2. Pride is a very dangerous variant of Pain, and unlike their angelic counterparts Urbane and Gravitas, Pride and Pain do not fight together.

"A fallen angel from Paradiso who once served God as a blazing chariot.

Bearing the name Pride, those who summon him trade their ears and eyes for power and pleasure.

However, those who call him forth must be careful with his power: he controls his reins, not the one who summoned him. And once the flames of the chariot have been ignited, they cannot be extinguished. Not even by Pride himself."

Pride first appears near the end of Chapter VIII and during Chapter X. It is also the 5th battle fought in the 4th set of the Witch Trials.

Pride functions as a more aggressive version to Pain, embodying all the latter's traits and attacks. It primarily attacks by swinging its arms in arcs or slamming them into the ground and can also fire a hail of bullets when Bayonetta is quite far away. Pride accomplishes these in a faster and more dangerous manner, making it more difficult to combat than Pain. The wheels on Pride's arms are also constantly ignited in flame, giving it more damage to its attacks. However, this also makes Pride susceptible to taking greater damage from Undine's ice elemental attacks.

Just like Pain, Pride has a chance to drop its spiky, skull-adorned wheels as a demonic weapon that function exactly the same as Pain's. Bayonetta kicks the weapon away from her, causing rather heavy damage to anything in its spinning path. The weapon has a single usage, regardless of whether it hits an enemy or not. These wheels are still colored blue as if they were dropped by Pain.

Much like Pain, Pride is not very susceptible to being stunned but also attacks a lot faster than its counterpart. Like most enemies though, Pride can be momentarily stunned by using Alruna's Charge Modifier during Witch Time, leaving it open to attack. Fast moving weapons such as Rakshasa are recommended to combat the speed of Bayonetta's opponent and Salamandra can also inflict heavy damage if Pride becomes stunned or the player is feeling brave enough to get in range. 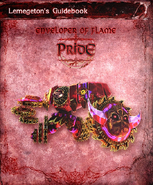 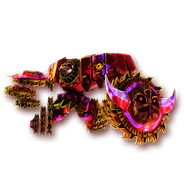