N/A
Phantasmaraneae, also known as the Twister of Flame, is a large and terrifying arachnid demon. Appearing in both games in the series, Phantasmaraneae appears as both an ally and enemy mini-boss to Bayonetta.

"Phantasmaraneae nests upon a sea of magma, deep within the furthest reaches of Inferno. Rarely seen upon the face of the Earth, even sightings of the demon in hell are a seldom event, leading to its name, which means phantom spider.

While having the frightening appearance of a spider, it is a curious beast, and should one have the good fortune to encounter the Phantasmaraneae, one should treat it with care and respect, in hope of receiving rare treasures and secrets in return.

*The Phantasmaranae are growing increasingly violent, perhaps due to recent occurrences of unnatural phenomena in the human world. Sightings of the creatures outside their molten lairs may be related to this change in behavior. Anyone who encounters one is advised to take caution: Phantasmaranae can spit magma from their stomachs capable of incinerating victims within seconds." (* Bayonetta 2 only)

Phantasmaraneae's appearance in the first game is limited to the boss fight against Sapientia. After whittling down the angel's health, Bayonetta summons the demon and subsequently uses Madama Butterfly to steer Sapientia towards it. When close enough, Phantasmaraneae lunges at Sapientia and cracks away his armor piece by piece. Bayonetta does this twice before Sapientia's whirlpool cuts her attempts short.

After beating the Virtue, Bayonetta calls forth Phantasmaraneae one last time to make the final kill. As Sapientia is trapped in a giant web, Phantasmaraneae's children appear and proceed to brutally tear the angel limb from limb into their lunch. With a roar of triumph, Phantasmaraneae disappears back to Inferno.

Phantasmaraneae returns in the sequel, though this time as a mini-boss that Bayonetta must defeat in order to journey deeper into Johnson Forest. Though rather resilient to her attacks at first, the demon eventually falls and explodes, clearing Bayonetta's path.

Phantasmaraneae can also be fought on Tag Climax mode, appearing in conjunction with Labolas when the difficulty is set to maximum.

Phantasmaraneae appears as a giant infernal spider with a particular affinity to fire. It wears a crown of skulls atop its head and similar skull adornments are visible on its legs. It appears partially doused in flame and the inside of its mouth resembles molten rock to hint further at this connection. When summoned in the first game, the majority of its body is wrapped in black/white hair.

In Bayonetta 2, without anything to obscure its features, Phantasmaraneae's fire connection is even more apparent with the entire demon, seeming to be aglow with flames. But basically its appearance stayed the same.

Most of Phantasmaraneae's abilities are not demonstrated until the fight against it in Bayonetta 2. The demon uses a lot of fire-based attacks such as fireballs and, area-of-effect explosions to do damage. It frequently uses its size and surprising speed to do damage, sweeping its legs at Bayonetta in wide arcs. It is also capable of summoning its children in a swarm and, can also bury itself underground to strike from below in an attempt to catch players unaware. 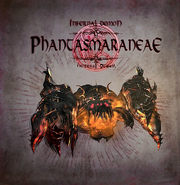 Phantasmaraneae summoned by Jeanne in the demons model gallery. 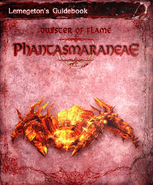 As seen in Lemegeton's Guidebook in Bayonetta 2

Close-up of Phantasmaraneae in Bayonetta 2.