Pain, also known as the Driver of Agony, is a large, blue-colored mechanical demon enemy that transforms from a coffin in the second game, Bayonetta 2. Acting as an infernal version of Beloved and Urbane/Gravitas (without elemental attacks), Pain tends to accompany groups of Hideous or Fury on the battlefield and can sometimes appear in pairs.

"A powerful tank that would trample angels with bloodstained iron wheels and drag them into a world of nightmares during wars with Paradiso. According to Vigrid legend, Pain's wheels were used for torture, until becoming sentient themselves and reincarnating in Inferno.

Similar to how those of strong faith are said to have rare encounters with angels, humans harboring strong feelings of doubt are more susceptible to finding themselves face-to-face with a demon.

Like his name, Pain is said to feed on the subconscious feelings of injury and hurt in one's soul and will appear anywhere people misguidedly attack each other in an effort to obscure their own sense of loss and loneliness."

Pain first appears as a boss in Chapter V in the Cathedral Of Cascades, becoming more common in later chapters featuring demonic enemies. With limbs ending in spiked wheels that have an incredibly long-range, Pain primarily attacks by swinging them in arcs or slamming them into the ground. Pain can also fire a hail of bullets from its limbs when they transform into a gun, only firing them when the player is quite far away. Similar to other large enemies such as Beloved and Belief, Pain can become stunned once its health reaches a low point and can be knocked around the battlefield using Wicked Weaves.

When reduced to low health in Chapter V, Bayonetta will be able to perform a Climax in which she summons the horse demon Diomedes. Once summoned, it will throw Pain into the air with its horn and repeatedly slice into it before finishing with a powerful slash.

In most instances when defeated, Pain will leave behind a demonic weapon taking the form of one of its wheel-like limbs. Bayonetta sets it spinning in the ground before kicking it away from her, causing rather heavy damage to anything in its path. The weapon has a single usage, regardless of whether it hits an enemy or not.

Pain is very tank-like by the fact that it is very difficult to stun with most of Bayonetta's attacks, even her Wicked Weaves. Its ability to use multiple attacks from both up close and long-range make taking it out a priority. Like most boss enemies, Pain can be left easily vulnerable to attack using Alruna's Charge Modifier during Witch Time. Whilst weapons like Rakshasa are recommended for quick if not spectacular damage, an alternate option is Salamandra. Using the weapon's hidden strike ability, these can inflict heavy damage on Pain if the player is feeling brave enough to get in range. 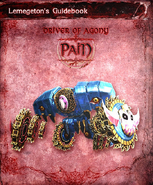