Bayonetta Wiki
Register
Don't have an account?
Sign In
Advertisement
in: Bayonetta 2, Characters, Omniscent Being,
and 2 more

Red and Blue (while summoned)

Cream and Black (while summoned)

None
Omne, called the Controller of Creation, is a powerful omniscient being that was formed by a miraculous union of the powers of Paradiso and Inferno. This being was summoned by both Balder and Bayonetta during their final battle with the God of Chaos, Aesir.[1]

"An omniscient being formed by a miraculous unison of the powers of Paradiso and Inferno.

The past leaders of the Umbra and Lumen clans, though they were aware of Omne's existence, were unable to summon it to this realm. It took the combined power of light and darkness, united in the bond of father and daughter, to finally summon Omne successfully.

Possessing the qualities of both darkness and light, it can defeat even the most despondent of chaos."

*Note: Despite the fact that Omne's entry is within the Book of Infernal Demons, it should be mentioned that the entries within the book records beings which are summoned. Meaning not all beings within the entries, such as Omne, are actually demons.

Appearing very similarly to the combined forms of Jubileus and Queen Sheba when summoned, Omne resembles a female with long strands of "hair" with skulls adorned on the top portion of its "hair".[1]

Formed by a powerful union of power from Paradiso and Inferno, the omniscient being came into existence. Although this being's existence was known through the leaders of both the Lumen Sages and Umbra Witches, they were unable to successfully summon it to the world.[1]

After Loki destroys both of the Eyes of the World at the climax of the game, Aesir's power dissipates and leaves him vulnerable to attack. After he is subdued, Bayonetta and Balder combine their powers and are able to summon Omne. The giant creation powers up and then dropkicks Aesir so intensely, it separates his soul from his body, sending his body flying through the sky where it is promptly eaten by Jeanne summoned Gomorrah.[1]

Omne is a powerful being, described as an omniscient being from the combined power of the Inferno and Paradiso. It is considered so powerful, its summoning required the combined powers of a Lumen Sage and an Umbra Witch with a special, familial connection. It is currently the most powerful summon witnessed. When summoned, Omne possesses extreme combat prowess and power far greater than Aesir, as it is capable of performing a dropkick on the supernatural being so strong, it separated his body from his soul.[1] 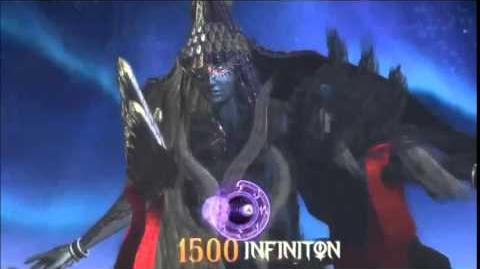 Omne kicking Aesir so hard, it catapults his body away from his soul

Close up of Omne