N/A
Mictlantecuhtli, also known as the Presser of Destruction, is a bat demon that Bayonetta can summon in the game, Bayonetta 2. Though not able to be summoned on its own as a Climax Attack, it mostly appears during Umbran Climax when using Love Is Blue, Rakshasa, Chernobog, and/or Shuraba.

"A gigantic bat that lurks in one of the darkest and deepest of Inferno's endless caves. It is said to leave trails of the plague wherever it goes.

The protrusion on its head is not an eye, but a spiritual sensory organ that can allow Mictlantecuhtli to access the world in far deeper ways than beings who must only rely on sight alone."

As mentioned previously, Michtlantecuhtli appears only in specific gameplay circumstances. It is seen most often when using Umbran Climax with its 3 signature weapons when it slams down or sweeps its wings across the battlefield in devastating area of effect attacks.

Michtlantecuhtli is also summoned as Greed's Torture Attack. Bayonetta summons the demon on top of Greed before Michtlantecuhtli spins around with a tornado-like force and presses its foe into the ground (reflecting its alternate title). Greed's body eventually gives way and is easily crushed into oblivion.

Resembling a gigantic bat, Michtlantecuhtli lacks any proper limbs along its thin body and instead has 2 sets of wings, one smaller than the other. It possesses multiple eyes, including its special perception organ, sharp teeth similar to Scolopendra, and a membrane resembling its wings wrapped around its head which is adorned with a pair of sharp horns. Its body is also covered in smaller spikes down its entire length. 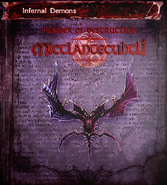 Mictlantecuhtli drops from above during Umbran Climax

Retrieved from "https://bayonetta.fandom.com/wiki/Mictlantecuhtli?oldid=50589"
Community content is available under CC-BY-SA unless otherwise noted.