N/A
Malphas is a large, crow or parrot-like demon that appears in Bayonetta and Bayonetta 2. It can be summoned to finish off airborne enemies; it also gives Bayonetta the power of flight.

"An enigmatic raven-black bird shrouded in the mysteries of the sky. Ever curious, Malphas has filled itself with all the world's knowledge and mysteries.

However, this same curiosity has led to a rather brutal demeanor, causing the bird to tear those it encounters to shreds with its sharp beak and razor-like talons."

In Chapter IV, Bayonetta summons Malphas to eliminate Fortitudo. Manifesting in midair, Malphas spreads its wings and dives at the Auditio. The demon then pins Fortitudo to a piece of debris and begins to peck at its victim with increasing speed before severely injuring the angel and disappearing.

Malphas reappears in Chapters V and VI; it helps Bayonetta defeat the first sphere angel Inspired. Once it appears, Malphas grabs Inspired's neck and tears the angel's head off. Malphas eats the severed head; it flies away and returns to Inferno afterwards.

Malphas appears above Gomorrah and Hideous on a stained glass window.

Bayonetta, Jeanne, and Rosa summon Malphas' wings in order to fly and face enemies in midair.

Malphas resembles a crow or a raven. It has four blue eyes; one is larger than the other three. A necklace of skulls hangs around Malphas' body, and a red crescent moon pierces through its forehead. Malphas' talons are red and sharp; the demon has elegant red wings, and three long tails. Two of these tails end in red, thorny bulbs.

Malphas' name and birdlike appearance are derived from the Grand-President Malphas of the Pseudomonarchia Daemonum and Ars Goetia, who commands 40 legions, builds large citadels, and towers that can withstand anything, and destroys his enemies with powerful magic.

Grand-President Malphas takes on the form of a small crow to spy on others; his true form is that of a large, well-built man with grey wings, black hair, a goatee, and piercing blue eyes. 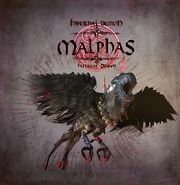 Malphas' Book of Infernal Demons page as it appears in Bayonetta

Concept art of Malphas and Madama Butterfly from Bayonetta 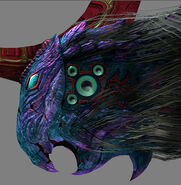 Malphas' head as it appears in Bayonetta

Malphas as it appears when summoned by Jeanne

Malphas as it appears when summoned by Bayonetta

Malphas as it appears when summoned by Jeanne

Bayonetta as she appears with Malphas' wings

Jeanne as she appears with Malphas' wings