Malicious, also known as the Gazer of Death, is a bird-like demon enemy with a spherical lower half instead of legs that appears in the second game, Bayonetta 2. Acting out a similar role to the other demons as Enrapture does to the angels, Malicious is never found alone and accompany other Demons on the battlefield to act as an enhancer.

"A master occultist of Inferno who is the embodiment of malice. Stealing various names from different creatures in hell, Malicious is just one name by which he is known.

Inexperienced witches will unwittingly summon Malicious and make a contract with him before knowing his true identity or appearance.

No matter how kind or courteous Malicious may act, he is not to be trusted under any circumstances. He is a shaman of hell who finds his greatest delight in deceiving and betraying others, trapping them in regret and hopelessness."

Malicious can be seen as the Infernal counterpart of the angelic Enrapture. It buffs its allies into an enraged state as if they had been afflicted by the Gaze of Despair or a taunt. If Malicious is hit, then the effect will disperse until it is either killed or left alone. Unlike Enrapture, however, Malicious possesses a boss life bar, making them more resilient than some other demons, but they are still relatively weak by comparison.

Should Bayonetta approach the demon, it will attack by swiping its wings at her, which can be dodged to engage Witch Time. At a distance, Malicious will also attempt to ensnare Bayonetta in a portal with demonic arms holding her in place, leaving her open to attack. Other attacks involve it throwing the crescent blade on its back like a boomerang, performing a flying charge, firing its feathers like homing missiles, and firing large, purple fireballs. During the Jetfire Assault part of Chapter XVI, it will use mostly ranged attacks, firing its feathers at the jet as well as firing large, purple fireballs.

If a Torture Attack is unleashed on Malicious, Bayonetta will summon the dragonfly demons collectively known as Carnage to gorily tear her foe to shreds, killing it instantly with no struggles without it. Just hit the button fast enough to end the boss battle.

Because of their counterpart status with Enrapture, Malicious do not have as much vitality as other demons with a health bar such as Hatred, making them much easier to deal with. The majority of Bayonetta's arsenal can dispatch Malicious with ease through the correct usage of Witch Time, the quickest of which would be the high damage dealing Salamandra chainsaws. 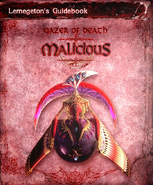 Malicious' introduction, naming it the Gazer Of Death 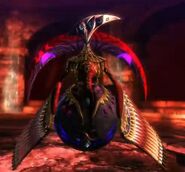 Retrieved from "https://bayonetta.fandom.com/wiki/Malicious?oldid=50693"
Community content is available under CC-BY-SA unless otherwise noted.