Red (White when summoned by Jeanne)

In the first game Bayonetta, only Madama Styx's limbs appear as Wicked Weaves that Jeanne uses in her battles. In the second game, Bayonetta 2, the demoness appears entirely for the first time when Jeanne is the selected playable character, replacing Butterfly in her appearances for these battles and also during Umbran Climax.

"Queen of the River Styx, the boundary between humanity and Hades. The moths born from the magical power that flows from her body are charged with luring the souls of sinners into Inferno.

By trading their soul to Madama Styx, one is able to obtain great power and knowledgeable counsel."

Similar to her counterpart, Madama Butterfly, Styx takes the form of a humanoid woman with insect traits, though with a moth theme instead of a butterfly theme. Her skin is a light pink color, instead of white as shown in concept art of her, and she has her own unique headdress that resembles a large ring with square patterns on the inner part and dots on the outer. The opening in her headdress shows a glowing, red moth insignia, golden ornaments also align on her forehead, and black mask-like details go over her eyes. Her wings are also shown to be the same as Madama Butterfly's.

In Bayonetta 2, it is revealed that the design of Styx's dress, heels, and cuffs are the same as Madama Butterfly's but colored red. Below her breasts, she has a more intricate pattern design and her breast size is smaller, being less endowed than Madama Butterfly in the same way Jeanne is less filled-out when compared to Bayonetta. She is also shown to be the same size as her counterpart (barring her headwear).

In the first game, only Madama Styx's arms and legs are shown during Wicked Weaves and are the main source of Jeanne's more powerful attacks.

When fighting against Jeanne, Madama Styx's limbs are one of the only types of attack that Bayonetta can dodge to activate Witch Time. From the second battle against Jeanne onward, a quick-time event between the witches and their contracts causes multiple fists to lash out at once in a clash.

While playing as Jeanne, Madama Styx's limbs manifest in the same way as Bayonetta's Wicked Weaves. Her limbs can change color when equipping particular weapons and manifest in different ways from palm thrusts to sweeping kicks. She also forms Jeanne's shadow when it is cast and her wings are used to give the witch an extra boost in height when she jumps. When equipped with the Sergey's Lover Madama Styx also appears as two images that mimic all of Jeanne's moves.

Madama Styx returns in a similar manner to the first game, serving as the basis for Jeanne's Wicked Weave attacks. The witch uses her as the only source of her Wicked Weaves. Madama Styx's previous attack movements and provided abilities return along with some new attacks such as uppercuts and flying kicks.

Madama Styx manifests and attacks the same way Madama Butterfly does during Umbran Climax and certain Torture Attacks. Playing as Jeanne while fighting the Masked Lumen during Chapter IV allows players to control Styx as she goes one-on-one with Temperantia. Madama Styx will also replace Madama Butterfly in some cutscenes, the same way Jeanne replaces Bayonetta in Story mode. 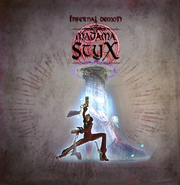 Madama Styx's fist in the demons model gallery from Bayonetta

Madama Styx's heel in the demons model gallery from Bayonetta 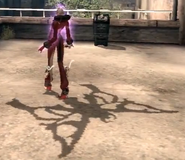 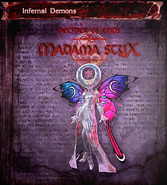 Madama Styx's page in the Book of Infernal Demons in Bayonetta 2.

The shadow of Madama Styx in Bayonetta 2

Madama Styx during the climax finisher against Valiance

Styx during a Torture Attack in Bayonetta 2.

Styx being fully manifested in the battle against Balder

Styx and Temperantia's fists are about to collide

Styx facing off against Temperantia