"Purple"; Black when summoned by Bayonetta

N/A
Madama Butterfly is the demon in which has made a pact with Bayonetta, being the main source of most of Bayonetta's power.[1] While her limbs manifest most commonly as the Wicked Weave attacks Bayonetta uses in her battles, she fully appears in the second game, Bayonetta 2 during some of the Umbran Climax.

"A demon taking the form of a woman who left this world under unfortunate circumstances, only to be reincarnated in hell. Unlike her beautiful, swallowtail butterfly-like appearance, this demon is particularly brutal, and her reputation is well known even amongst the denizens of Inferno.

If a conjurer were to sign a contract and trade her soul, the demon would impart upon her enormous power and great wisdom."

Madama Butterfly takes the form of a beautiful woman with a swallowtail butterfly theme. She wears a purple dress that splits from the middle up to her thighs, showing off her long blue legs, spiked purple high heels with butterfly accessories on them, sharp shoulder pads, and the top of her dress is also open in a way that shows her breasts rested against purple straps. On her arms are long , ridged purple braces that wrap around her middle fingers, along with butterfly accessories and red spikes on her knuckles. Madama Butterfly's most defining feature is the large butterfly-shaped headpiece that sits evenly on her head along with gold spiky ornaments that rest on her forehead. Her eyes are completely red, and appear almost jewel-like. In a physical form, she is revealed to rival Gomorrah in size and towers over all beneath her.[2]

After disappearing from the world due to "unfortunate circumstances" and being reincarnated in hell, Madama Butterfly garnered a reputation in Inferno due to her brutality.[3] At some point, she also became a hated figure to the infernal demon Alraune though the circumstances of her hatred for Madama Butterfly remains unknown.[2]

While fighting the Masked Lumen, she is promptly summoned by Bayonetta to do battle with the him. In response, the Lumen Sage then summoned Temperantia, and the demon and angel fight one another in the background. Trading blows with one another, Madama Butterfly is shown to equal the Cardinal Virtue in strength, throwing multiple punches at each other, until both throw a punch strong enough to send them both flying in opposing directions and causing them to de-manifest.[2]

Later, due to the imbalance created after the death of present Balder, the Right Eye, Bayonetta finds herself betrayed and fighting various demons. When confronted with aggression by Pain, she remarks her gratitude for some demons remaining loyal and keeping their part of their contract. Madama Butterfly's hand then briefly manifests, giving a fist bump to the witch.[2]

After making her way to Inferno in order to rescue Jeanne from Alraune, Bayonetta summons Madama Butterfly to assist in beating Alraune. However, the latter revels in finally meeting Madama Butterfly, revealing a very deep hatred for her, but why is never explained. Bayonetta, impressed with however she managed to anger her, only remarks "nice" in return.[2]

Madama Butterfly's most notable skill is her immense brute strength in which Bayonetta often uses in her Wicked Weaves attacks and skill in combat. A known brutal fighter, she is capable of easily overpowering the Valiance angel by using the angel's sword against its body, fight on par with that of the Auditio , Temperantia, and shatter a large meteor launched at her by Loptr[2], by headbutting it.

Possessing some magic, she is capable of manifesting her wings, allowing her to fly. Madama Butterfly is also capable of performing witch time when dodging Temperantia's attacks.[2]

In the first game, only Madama Butterfly's hands and heels are summoned during Wicked Weaves. Her limbs sometimes change color when equipping certain weapons and attacks in different ways from claw strikes to palm thrusts. She also forms Bayonetta's shadow when it is cast and her wings are used to give the witch an extra boost in height when she jumps. When equipped with the Sergey's Lover , Madama Butterfly appears as two images that mimic all of Bayonetta's moves.

Madama Butterfly can now be summoned fully during certain Umbran Climax and Torture Attacks during boss fights and against other demons. All of her previous attack patterns and provided abilities are included along with some new ones such as uppercuts, headbutts, and flying kicks. In addition, Bayonetta can use her wings to glide across short distances.

Madama Butterfly is briefly controllable during the fight against the summoned Temperantia in Chapter IV. She uses her fists to sideswipe and uppercut her foe and is able to activate Witch Time by dodging Temperantia's own attacks.

Appearances in Other Media

Madama Butterfly accompanies Bayonetta in Super Smash Bros. for Nintendo 3DS & Wii U. Her limbs can be summoned as Wicked Weaves for Bayonetta's Smash attacks and her wings appear when Bayonetta performs a midair jump. In the Wii U version of the game, she also appears in Bayonetta's shadow.

Aside from all the above returning, Madama Butterfly's Spirit can be obtained. It is a Support Spirit, has a rarity of four stars (Legend class), requires a Primary Spirit with all three slots to use, and its ability allows the player to heal damage through poison, rather than take damage. 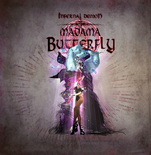 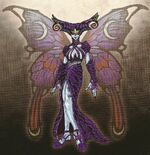 Madama Butterfly's fist in the demons model gallery from Bayonetta

Madama Butterfly's heel in the demons model gallery from Bayonetta 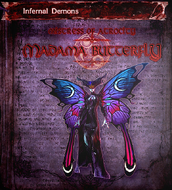 Madama Butterfly in the Book of Infernal Demons in Bayonetta 2

Another view of Madama Butterfly during Umbran Climax

Madama Butterfly about to headbutt Gomorrah in Bayonetta 2

Madama Butterfly about to punch the Prophet 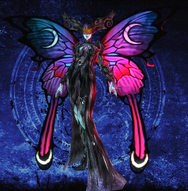