View source
watch 02:39
'Bayonetta' Lore: Luka
Do you like this video?
Play Sound

Main Universe
Luka Redgrave is a secondary character in Bayonetta and Bayonetta 2. Nicknamed "Cheshire" by Bayonetta herself, he is a journalist and escape artist in relentless pursuit of the witch. He initially believes that Bayonetta is little more than a cold-blooded killer responsible for the death of his father Antonio and wishes to expose her secrets to the world at large. Luka has no combat skills as such, but he does however have a grappling hook and a good sense of timing and smell.

In the first game, Luka is portrayed a tall, light skinned young man, shown to have shoulder length wavy brown hair, with its upper layer tied with two side bangs. He wears a white T-shirt and a formal sleeveless grey jacket on top, with a pair of glasses hanging on the front. He also wears an unbuttoned black jacket and dons a long blue scarf, with diagonal white and orange strips going down and fringe on both ends. Luka wears arm length gloves that appear to be made of leather and jackboots that reaches just below his knees.

In the sequel, Luka has changed his attire to a more 'cowboy' themed style. He now has his hair loose, adorned a hat with a blue pattern around the circumference. The hat has two strings hanging on each side of the brim with two beads, blue and red on each. He wears a light grey shirt with elbow length sleeves, a V-neck T-shirt and black leather sleeveless jacket with leather fingerless gloves. He wears a scarf like before, but it is tucked into his shirt instead of hanging loose around his neck. He also wears cowboy-black leather pants with fringes on the bottom. Along with his clothes, Luka also possesses a new pair of glasses made by Rodin (in exchange for Japanese Shinshu sake) which lets him see into Purgatorio.

Luka was shown to hate Bayonetta for believing she murdered his father. He came to have a professional relationship with Bayonetta later on in the game through their combined interests. He aided her and Cereza several times. His hatred for Bayonetta disappeared when he learned the truth of his father's death. Balder was the real reason his father died. He showed sadness in the end at Bayonetta's apparent death.

In the sequel their relationship appears more professional. Luka shows sympathy when hearing of Jeanne's condition, and offers to help Bayonetta in any way he can. He later aids Loki towards the end of the second game.

Born March 3rd 1977, Luka accompanied his father as a boy twenty years before the events of the game to unearth the secrets of a strange coffin resting at the bottom of a lake. Once Antonio opened the coffin, releasing Bayonetta from her five hundred year slumber, he was attacked by an unseen force and suspended in the air. As Bayonetta disappeared through a portal, Antonio was torn apart and killed, leading Luka to believe that she had killed his father.

Twenty years later, Luka became a journalist as well, using his father's notes to seek the truth, hunt down Bayonetta and avenge his father's death. He plants a bug in Enzo's car after Bayonetta's fight in the graveyard and uses this information to find her in Vigrid, where she is pursuing the truth about her lost past. Though he attempts to catch her and take photos, she outwits and startles him before vanishing again, leaving him to shout after her that she only runs because she has him to fear.

He meets up with Bayonetta again at the Crescent and Sunrise Valleys, with her drawing on his face with her lipstick. However, that meeting is short lived, with him having to flee as she fights more angels. He makes his way, however, to the Vigrid Air Force Base, where he first meets Cereza and believes that Bayonetta has put a spell on the girl to make her think that she is the witch's daughter. Given his experiences with her, he believes that Bayonetta has killed her real parents.

Luka commandeers a military vehicle in an attempt to beat Bayonetta to Isla del Sol, the metropolis of Vigrid and home of the Ithavoll Group, which holds many secrets and ties to the Lumen Sages and Bayonetta's past. Neither he, Cereza nor Bayonetta can make it to the island across the highway and the Prominence Bridge as the angels destroy it and make it impossible to cross. As Luka and Cereza are forced to turn back whilst Bayonetta is flung into Paradiso, Cereza lets Luka borrow her glasses in order to make sense of the explosions that seem to have followed them into their forest hiding place. After putting them on, he sees the angels that Bayonetta is fighting in Purgatorio and begins to believe that she isn't all she seems to be. Cereza later tells him that witches protect people from monsters, casting further doubt on what he thought he saw as a child.

From the Vigrid Air Force Base, Luka hijacks a helicopter and saves Cereza and Bayonetta from a downed Valkyrie Military Transport. As they get closer to Isla del Sol, he is momentarily caught off guard by Bayonetta's appearance and the helicopter is destroyed. Bayonetta is forced to man a missile to get to the island, with Luka barely hanging on during the dangerous ride. When they manage to get to Isla del Sol, he distracts Jeanne from her fight with Bayonetta long enough to take both Cereza and the missile controls she had been using. As he escapes with the girl in a jeep, Jeanne makes Bayonetta believe them to be both dead after the vehicle is destroyed in mid-air. In reality, Luka and Cereza managed to escape thanks to his quick timing and grappling hook.

Luka meets up with Bayonetta inside the Ithavoll Building, carrying a sleeping Cereza. After Bayonetta pursues Cereza when she disappears, he is cut off because of a large door. He later finds his way up to Bayonetta in Balder's office, seeming rather bloodied and bruised and it is here that Balder reveals the truth behind his father's death. It was not Bayonetta that killed Antonio, but the angels under Balder's command that were invisible in Purgatorio. Bayonetta had actually gone to fight them, but was too late to save him. Following this revelation, Luka narrowly escapes being killed in the same way thanks to Bayonetta. However, she is not quick enough to save him from being launched to what is believed to be his death.

Luka is later shown to have survived, thanks to Bayonetta having caught him on a missile like before. After Cereza is returned to her rightful place in time, he can only watch as Bayonetta is overcome by the power of Jubileus, becoming the Left Eye. As the creator is resurrected and both Bayonetta and Jeanne fight the goddess, Luka can only watch from the ground as the remains of the statue burn up in the atmosphere. He expects Bayonetta to be sneaking up on him, but is disheartened to see that he gets no such surprise.

Afterwards, at the graveyard, Luka leaves rosemary on Bayonetta's grave. Based on what she told him of it acting as a demon repellent, he thinks will help her upon what he believes is her final resting place. However, as the nun performing the ceremony is revealed to be Jeanne, more angels come and the entire thing is shown to be a set up to attract them. Bayonetta wakes up from her nap in the coffin and Luka watches as she dances and fights her way through the horde with Jeanne. He reflects on the events up until this point and remarks of Bayonetta's perfume having rosemary in it. Calling back to what he had said to her earlier, she remarks its meaning of remembrance now suits her.

Luka returns in the sequel, sporting a new look and offering to provide new information regarding the Trinity of Realities and the truth of the gods if they can help Bayonetta in her journey to help Jeanne.

Luka first meets Bayonetta in Noatun after she finishes fighting off a horde of angels and he fails in his attempt to save her from falling. As he can properly see Bayonetta now through the use of his new magic glasses created by Rodin, he expresses his surprise that she refers to him as Luka instead of Cheshire. He divulges that he heard about what happened to Jeanne and offers to dig up anything about the city and Fimbulventr if it'll help her out. He later runs into Loki after Bayonetta's battle with Glamor, questioning the boy's insistence to get to Fimbulventr before heading off.

Luka follows the clues of his research to near the top of the Cathedral of Cascades. Meeting Bayonetta and Loki once again, he reveals some more information about the true creator of the universe. The Overseer was a self proclaimed god of chaos and was the being that created the Eyes of the World for the Sages and the Witches to watch over the passage of history. He also makes a guess that Balder's death, and the subsequent loss of the Right Eye, was responsible for Bayonetta losing control of Gomorrah at the opening of the game. As Bayonetta and Loki continue upwards to the top of the Cathedral, Luka observes a mysterious figure apparently pursuing them.

Later, after Luka is able to discover the Gates Of Hell and accidentally opens them, he sets a weakened Loki free. Claiming he now remembers everything, Loki pleads with Luka to take him to Fimbulventr before passing out. Remarking on how carrying the boy would be easier if he was a 'Cerezita who weighs, like, ten pounds', Luka carries out the request and reaches the entrance to the top of the mountain where Loptr is waiting for them. He promptly chokes Luka unconscious and takes Loki for himself.

When Bayonetta and a young Balder arrive, they are too late to stop Loptr from taking Loki's Sovereign power. Luka swoops in and manages to save the boy from further harm, prompting Bayonetta to remark how he has remarkable timing. Luka watches as the Witch and Sage battle Loptr, who has now taken both of the Eyes and returned to being Aesir, and Loki's eventual trump card that erases the Eyes from existence to win.

After the events of Fimbulventr, Luka is roped into handing out flyers for Rodin despite his complaints that his time is being wasted. When Rodin says that he will be without a source of information if he doesn't, Luka notes how Enzo should be doing this instead before almost crashing his car.

Luka, as a child, giving a rose to the Vigrid Beauty.

Luka with his camera

Luka in his Vigrid outfit

Luka, with Bayonetta just out of reach

Luka with Bayonetta and a sleeping Cereza at Isla Del Sol

Luka as seen in Bloody Fate. 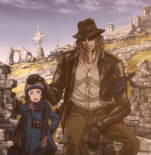 Young Luka with his father. 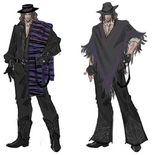 Artwork of Luka's journal, the stamp in the corner reads "NOATUN"

Luka as he appears in Bayonetta 2.

Luka upon arriving in Noatun.

Luka thinks he's about to save Bayonetta...but not quite.