Shortly after the Eyes of The World were separated[1]

None; formerly Leader the forces of Inferno & Paradiso[1]

Remembrance of Time
Eyes of the World

N/A
Loptr, called the Prophet and the Prophetic One, is the supernatural being and evil personality of Aesir given form after his former complete being bestowed the Eyes of the World to the humans that became the Lumen Sages and Umbra Witches, resulting in Aesir's being split in half as well as his evil side being born from man's negative qualities being realized.[1]

Plotting to reclaim his complete being's former power, he subtly instigates the Witch Hunts with the Angels of Paradiso and manipulates a past version of Balder and has both angels and demons alike work to reclaim both of the Eyes of the World. Later in the story, he reforms into the complete being of Aesir in which is absent of his good personality.[1]

He is the main antagonist of Bayonetta 2 and acts as a boss within the game.

"Waiting for Bayonetta and Loki at the Gates of Hell was the masked Lumen Sage and a mysterious figure. The unknown presence seemed to have an outline that blurred ever so slightly, as if it were not an actual physical form. Yet from it radiated an ominous aura so thick one could feel the insides of their body being ripped apart.

Seemingly neither purely physical nor purely spiritual, nor angel, nor demon, for an instant a hint of confusion flashed across Bayonetta's features as she looked upon this fearsome opponent.

"Umbra Witch, is that the limit of your power? Did you never open your eyes to your true potential?"

"Was it reality or all just a dream? Finding herself in the midst of the Great War, 500 years ago, Bayonetta was suddenly attacked by a young boy with the exact appearance of Loki.

After the symbol of their clan, the clock tower, was destroyed, the Umbra began to scatter, routed by their enemy. Demons and angels filled the sky, warring with each other in a violent swirl of chaos.

Bayonetta knew where these events would lead. She was now faced with a momentous choice: would she change the course of history? However, the possibility that it was all a trap was never far from her mind. She had traveled from the past to the future, and then back again--the second time in her life she was made to leap through the dimensions of time and space.

The boy's mouth slowly contorted into a grin. His smile... how he stood there looking at Bayonetta... made his intent clear.

"I shall take back the power which belongs to me. The power of the Eyes of the World. You shall not interfere."

The evil within Aesir incarnate, Loptr embodies the worst aspects of humanity and is implied to feed upon these to gain strength. The Prophetic One openly mocks others. He is cruel, manipulative, and arrogant; he considers his supposed "better half," Loki, to be an inferior being. Loptr seems polite, patient, and calm; he is truly condescending and patronizing towards Bayonetta, her allies, and humanity in general. Loptr sees the free will Aesir gave to humanity as a cosmic joke and illusion; the Prophetic One seeks to become the supreme ruler of the human world and see the center of reality return to him.

Loptr treats the angels of Paradiso and the demons of Inferno as pawns; he shows little concern when they are defeated by Bayonetta and Balder. The Prophetic One's cruel manipulations know no bounds; to reclaim the Eyes of the World, he deceived both the Umbra Witches and Lumen Sages, causing them to wage war with one another. Loptr also posed as Loki when he murdered Rosa; this was done to make Balder his willing lapdog during the Lumen Sage's vengeful crusade in the future. Courageous and intelligent, Loptr dirties his hands only as a last resort. He is able to be surprised, as seen when Luka rescued Loki from him, but he is unmoved by things such as heroism.

Primarily, Loptr closely resembles his original self, Aesir. He has white hair, blue eyes, and dark skin. Intricate markings appear all over Loptr's body; the Prophetic One has pale, white lips and a diamond-shaped marking on his forehead. After Loptr succeeds in absorbing Loki's Sovereign Power, the marking on his forehead transforms into the symbol of Aesir (also known as the symbol of Chaos). Loptr wears a long, diamond-shaped, partially opaque cloak that glows with blue light. The cloak itself is adorned with gold frames that form the symbol of Aesir. Loptr also wears golden cuffs on his wrists and ankles.

In his younger form, Loptr is almost completely identical in appearance to his other half, Loki. The young Loptr's outfit is blue, however, and the symbol on his forehead is different. Young Loptr also does not wear Loki's goggles or pyramid-shaped pendant.

Aesir decided to reveal to humanity the true nature of its existence. Thus the god split his power into two halves to create the Eyes of the World. This also divided Aesir's soul, bringing Loptr and Loki into existence.

In order to protect the balance between light and darkness that these events bestowed upon the world, Loptr was given the Prophetic Power, and Loki was given the Sovereign Power. These respective powers allowed those who possessed them to control the Eyes of the World themselves.

Through the Remembrance of Time, Loptr kept track of the world's progression. A being of pure evil, the prophet sought to become Aesir once again. For this reason, Loptr manipulated the darkness in the hearts of humans; this resulted in the Witch Hunts. Loptr looked identical to Loki at this time; the antagonist would use this to his advantage when manipulating the Masked Lumen (who was truly a young version of a Lumen Sage called Balder) into doing his bidding 500 years later, after bringing him back from the past.

Loptr brings Balder to the present and tells the man that he knows who is responsible for the death of his beloved wife, Rosa. Loptr promises Balder a chance at revenge and proceeds to watch his scheme unfold as his minion pursues the hapless Loki.

Loptr appears to Loki several times in visions; an astral projection of the Prophetic One attacks Bayonetta before she is dragged into Inferno. When Loki's Sovereign Power awakens, Bayonetta is sent 500 years into the past; it is here that the Umbra Witch learns from Loptr's younger self that, despite their similar appearance, he and Loki are separate individuals.

The young Loptr attempts to kill Bayonetta; he is eventually forced to flee. Loptr kills Rosa as he did once before, but this time, Balder is alerted to the true identity of his wife's murderer. Balder and Bayonetta return to the present; meanwhile, the older Loptr lures Loki to the top of Fimbulventr.

When Bayonetta and Balder reach Loptr, the Prophetic One explains that he and Loki are truly two halves of the God of Chaos, Aesir. Loptr absorbs Loki's Sovereign Power; he proceeds to take the Right Eye from Balder and battle Bayonetta. After Bayonetta's Left Eye is stolen, Aesir is reborn with the intent of ruling the human world.

After Jubileus' defeat, Balder was close to death until Loptr broke his seal within Balder and tries to escape. Balder places his monocle on to seal Loptr inside of him again and died together in a burst of golden light.

As a supernatural being, Loptr can use magic. While in his child form, Lopt can utilized maigc cards much like Loki, having done so in order to frame his counterpart for the murder of Rosa and enable him to manipulate Balder. He can also create six magical arms similar to Wicked Weaves to punch and grab objects, these arms allowing him to reach into outer space and strong enough to hurdle a meteor. He can also conjure beams from underground. As an adult, he retains his younger self's abilities but to a heighten degree. His skill in magic enabled him to gain the upperhand on even Bayonetta as a child and adult, being one of the few opponents she could not defeat alone.[1]

As an adult, Loptr showcased the ability to project himself in a manner in which is considered neither purely physical or spiritual. The aura around is described as ominous and makes one feel as if their insides of their body are being ripped apart.[1]

After Aesir's being was split and Loptr was born, he learned that he had the ability to absorb the evil thoughts of human beings and accumulate a massive amount of energy from it and empowered himself to heighten levels capable of taking on even the most powerful of Umbra Witches and Lumen Sages.[1]

After capturing Loki, Loptr manage to steal the Sovereign Power, allowing him the power to control the Eyes of the World and even reclaim them for his own uses.[1]

Eyes of the World

With both eyes of the world in which he stole from Balder and Bayonetta, Loptr regain the power of creation and was able to remake himself into the new incarnation of Aesir and was considered a different being.[1]

With control over the Remembrance of Time, Loptr can make others see visions history unaltered and can restore things to their original state. In battle, he uses this to reform large objects to throw at his opponents. He also can foresee the current events happening in the world from afar.[1]

Loptr is an exceptional schemer, having been the one to have influence the Clan Wars and the Witch Hunts in his attempt to reclaim the Eyes of the World and manipulated a past version of Balder. He also possessed considerable influence, as both the Laguna and Infernal Demons followed his command despite their usual conflicting nature.[1]

"Loptr" is synonymous with "Loki," the name of the Norse god of mischief. 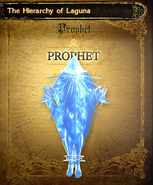 The Prophet as he appears in the Hierarchy of Laguna

Loptr is introduced as "Prophet" when faced for the first time in his adult form. 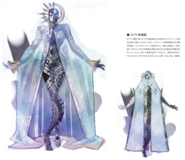 Concept artwork of Loptr's face, as seen in the antagonist's final design

Loptr meeting with the Masked Lumen for the first time

Loptr talking with the Masked Lumen

After the angels of Paradiso fail to bring Loki to him, Loptr decides to hunt the boy down personally.

The Prophet uses his power to hurl a tower at Bayonetta

A model of the Prophet's spirit form

A model of the Prophet 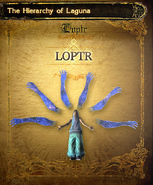 Loptr as he appears in the Hierarchy of Laguna

A render of Loptr's child form

Loptr's child form appearing to Loki in a vision

Loptr as he appears in a memory after killing Rosa

Loptr reveals himself after blocking one of Bayonetta's attacks

Loptr leaves to deal with Rosa and Balder 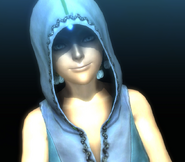 Loptr smiles after he kills Rosa

A model of Loptr's child form

Loptr's health bar as it appears in Bayonetta 2

The logo that appears when Loptr is introduced in Bayonetta 2