Black (when summoned by Bayonetta)

N/A
Labolas, the Destroyer of Fates, is an Infernal Demon that first appears in the second game, Bayonetta 2. Bayonetta comes to call upon it frequently following Gomorrah's betrayal.

"A beloved pet dog who had the bad luck to wander into hell, but the good luck and survival instincts to get through its harsh environment and grow into a force to be reckoned with.

With the superb hunting abilities, it has even become known to some as a merciless butcher. Once it has sunk its sharp canines into its enemy, it will not let go until their last breath."

When Gomorrah rebels against Bayonetta, the Umbra Witch summons Labolas to combat it.

In Chapter IV, Bayonetta summons Labolas to finish Urbane off. Later then she calls it once again during one of her battles against the Masked Lumen, who has summoned Fortitudo to his side. While Labolas is able to defeat its angelic opponent, the Masked Lumen attacks the demon and forces it back into Inferno.

After Bayonetta is sent back to the time of the Witch Hunts, she summons Labolas to fight a Beloved alongside Gomorrah, who has been called upon by Rosa.

Labolas makes its final appearance when Bayonetta summons it to attack Loptr. However, the Prophetic One effortlessly defeats his demonic opponent.

Labolas is a large, lion-like demon with massive, bat-like wings. It has three heads; two of them double as its front paws. Each of Labolas' heads possesses a pair of large, thick fangs and multiple red eyes. Skulls appear near the eyes of this demon's primary head; atop this head are curved horns. Labolas also has a long, thin tail.

When summoned, Labolas leaps at and bites its targets; it proceeds to tear them apart using its sharp fangs.

In Tag Climax, Labolas primarily attacks by swiping at opponents with its claws, or biting them with its main head. The demon may also charge at its foes at high speeds to ensure they are never out of range.

Labolas' name is derived from that of Glasya-Labolas, who, in demonology, is the twenty-fifth spirit of the Goetia and a Great President of Hell who commands thirty-six legions of demons.

Glasya-Labolas is capable of teaching men of all the arts and sciences in an instant; he is an author of bloodshed and manslaughter who incites homicide by revealing future events to others. Glasya-Labolas can make a man invisible, and he is depicted as a dog with the wings of a griffon. 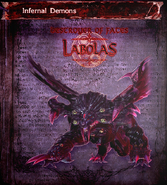 Labolas as it appears in the Book of Infernal Demons

An in-game model of Labolas

Labolas faces off against Fortitudo