View source
watch 01:17
'Bayonetta' Lore: Kulshedra
Do you like this video?
Play Sound

None
Kulshedra is a whip that channels a pink-purple serpent demon out of its hilt which appeared in the first game, Bayonetta. It has a teal and bronze-looking grip with a trigger-like button, at the hilt's base, is a gold chain with a cat hanging from its end. Jeanne's equivalent for Kulshedra is Vritra.

"A possessed whip, sealing away the soul of the ancient serpentine demon Kulshedra. Summoning the power of the demon from a portal on the weapon's hilt, it can be used in the same manner as a normal whip."

This weapon's Golden LP can be found in Chapter III and is broken into two parts.

Despite dealing with somewhat meager damage, Kulshedra is valued for its ability to control the battlefield, giving Bayonetta incredible reach, speed, crowd control, and relative safety at range. The demonic whip effectively allows her to pick and choose which enemies she wants to fight and in which order with its range and charge modification.

Wicked Weaves: Though most Wicked Punches will remain the same the sweeping Wicked Weaves will become Wicked Backhands.

Bullet Climax: When executed Bayonetta will spin Kulshedra around and thrust it upwards in a spiral, causing damage to everything around her and above her.

will cause Bayonetta to wrap the whip around her target. Once this occurs she will attempt to pull the target towards her, though this only works on smaller enemies such as Affinities or Applauds unless Witch Time is active, in which case a few of the larger enemies can be pulled as well. Larger foes can also be pulled if their armor is first broken away. If the joystick is pressed forwards the moment Bayonetta wraps Kulshedra around her target she will instead pull herself to the target, if it's pressed backward she will attempt to pull the target towards her and swing it over her head, at which point the player can rotate the joystick consecutively, causing her to spin the enemy in a circular motion around her, damaging all nearby enemies before flinging it away.

will cause Bayonetta to whip Kulshedra out around to her left and right before sweeping it in front of her and unleashing a Wicked Backhand. Pressing

quickly while she performs the third part of the combo will cause her to whip Kulshedra to her left and right a few more times than normal.

will cause Bayonetta to pull the targeted Angel towards her with the Charge Modifier if they're small enough. The subsequent

buttons will cause her to perform a series of unique slaps and then finish up with a Wicked Backhand that will knock everything away from her at a near 180-degree angle in front of her. 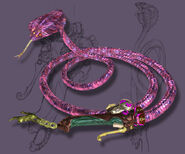