Kinships are Powers of the Second Sphere within the Hierarchy of Laguna. They are floating, ship-like angels that make their first appearance in Chapter IX of the first Bayonetta game.

"Kinship, as one of the Second Sphere Powers charged with defeating evil beings, is responsible for transporting the forces of Paradiso onto the battlefield. Leading countless angels to the front lines, catching sight of Kinship's magnificent flying appearance is analogous to many as the arrival of true happiness.

It is thought that Kinship is the angelic manifestation of the ark that saved a foolish human race from the devastating flood described in The Book of Creation within the scriptures of Ithavoll."

At the front of this enemy's body is a golden, winged muzzle with a human face, a shining halo, and a circular platform. At the back of this angel's body, there is a small cabin that opens to reveal its store of homing missiles. Several small paddles line Kinship's undersides. The front of the cabin has a red orb that acts as a weak point for fighting. It's basically, a giant maybe royal rowboat.

Kinship attacks by launching a salvo of homing missiles at its target; attached to the sides of its body are claws, that it uses to attack those, who are atop it or another of its kind. This enemy can also shoot a powerful laser at opponents. When killed, Kinships' corpses remain floating, acting as floating platforms.

The term kinship refers to a "blood relationship" or "a sharing of characteristics or origins." It also contains a ship, referring to the angel's boat-like design.

Kinship's design and origin are a reference to Noah's Ark.

In Christianity, the Powers are a class of angels that oversees the balance of human power. Powers also maintain Heaven's history and inspire conscience amongst mortals. 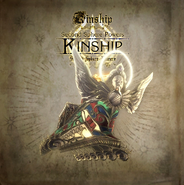 Kinship as it appears in the Hierarchy of Laguna

Kinship as it appears on the introduction screen in Bayonetta

Kinship emerging from a portal in Paradiso

An in-game model of Kinship 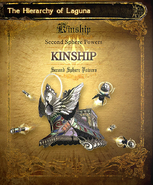