Start a Wiki
watch 01:18
'Bayonetta' Lore: Jubileus, The Creator
Do you like this video?

None
Jubileus (known as The Creator) is the Dea of the Hierarchy of Laguna who is the embodiment of Divine Will. Imprisoned at the end of the First Armageddon when the Trinity of Realities formed in eternal sleep, she is the primordial goddess-like being whom Father Balder and the Cardinal Virtues worked towards reviving in order to unite the Trinity of Realities and allow Paradiso to rule over the universe.[1]

She acts as one of the antagonists in Bayonetta and is the final boss of the game.

"The true name of Jubileus, as recorded in myth, is actually constructed from unutterable syllables. This is because humans remain incapable of capturing her true glory, as she is the total embodiment of Divine Will.

Humanity, bound to the physical world, was forced to depict and describe her in its own tongue. It is supposed that humanity selected the name Jubileus, taken from the word Jubilee, meaning a celebration of rejoicing, in an attempt to turn Divine Will into worldly happiness via repeated recital of her name. As a result of the cataclysmic events of the ancient First Armageddon of which she sat at the very apex, Jubileus was forced into dominion over the world of Paradiso, governor of the light amongst the Trinity of Realities, and put into an endless slumber.

It was from this point that the forces of light and dark began their endless battle for hegemony. The resurrection of Jubileus would trigger a reunification of the Trinity of Realities, fulfilling the desires of not only the forces of light, but also a centuries-old prayer said by those seeking divine intervention."

She resembles a female with long strands of "hair" with skulls adorned on the top portion of her "hair". Her "hair" is gold and her eyes are white. She has a red scarf around her arms and a halo showing her rank as a Dea.

Although little is known of Jubileus, Hideki Kamiya described her as possessing the personality of a self-absorbed, typical sixteen-year-old human.[2]

After the First Armageddon that created the Trinity of Realities, she was forced into becoming the ruler of Paradiso and was put into an endless slumber. From this, the Angels of Paradiso conspired to release her from her slumber, entering an endless war between themselves and the Infernal Demons.[3]

Having awakened Bayonetta's Left Eye of the World and his Right Eye of the World, Balder succeeds in awakening Jubileus from her eternal slumber. Jeanne, having survived an earlier missile barrage, and now free from Balder's mind control, leaps into action and frees Bayonetta from Jubileus, preventing the god from reaching full power. However, as the process of its revival had already begun, Balder is absorbed into Jubileus, awakening the deity and unleashing a cosmic horror. Despite this, Jubileus is not bequeathed with the powers of the Left Eye, leaving it with only the strength of the Right Eye.[1]

After a grueling battle, Bayonetta binds Jubileus by performing a summoning incorporating an unconscious Jeanne's hair with her own for the medium. Bayonetta is then able to unleash the demon Queen Sheba, the ruler of Inferno. Sheba uses her power to punch Jubileus' spirit from its body through the solar system and straight into the sun; in which her spirit was unwillingly merged with it. The statue that had made up Jubileus's body falls to Earth and both Bayonetta and Jeanne team up to destroy the physical vessel, leaving no trace of it behind.[1]

In the animated movie adaptation of the first game, Jubileus is referred to as Shushin (主神, lit. All-Father) and its role is somewhat different. Aside from the obvious referall to Jubileus as being a god with masculine traits that fits with religious mythos concerning a heavenly 'Lord' (these references do not appear in the English dub of the film), Jubileus is encapsulated in a celestial place in the heavens where angels watch over it in anticipation of it reawakening. Jubileus wakes up of its own accord without the need of the Eyes of the World and instead gains most of its power from angels that sacrifice their bodies to give it energy.

When Jeanne appears to help Bayonetta to escape from her prison, the sudden loss of power causes Jubileus to lose half of its body and make it appear burned. Balder uses his power to compensate and takes control of the deity in order to fight back. In response, Bayonetta and Jeanne summon Queen Sheba and start a battle that stretches across the cosmos. After Sheba beats Jubileus down, Bayonetta summons a wooden horse primarily seen for the Joy Torture Attack as Sheba uses a whip to bind Jubileus to it. After her mother's lipstick strikes a killing blow to Balder, Jeanne commands Sheba to use a powerful cannon to vaporize Jubileus into nothingness.

Jubileus holds the ability to combine 3 worlds (Earth, Inferno, and Paradiso) into one world by using the Eyes of the World, but without the eyes, she cannot combine the worlds completely.

In gameplay, Jubileus has the ability to alter the terrain to natural elements (magma, ice, and storm). She can fire missiles from her hair. Her weaknesses are the faces on her hair and her hands after throwing punches when using Witch Time. After being defeated and her soul was extracted by Sheba, the player controlling Jubileus toward the sun to vanquish Jubileus' soul forever.

In the anime movie, She gains the powers from the angels after her resurrection. After being burnt for losing the left eye, she has greater strength than Gomorrah. She can recover herself with celestial powers. She can use beams when firing at Queen Sheba. However, she wasn't completely invincible, as shown when Sheba punched Jubileus in her liver, grabbing her hair and throwing her to the moon soon after, was struck by a Torture Attack, and shot by Sheba.

The final boss fight against Jubileus takes place in five stages and one Climax sequence. For a detailed guide on the chapter Jubileus appears and how to beat it, please refer to the guide which can be found here. 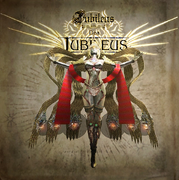 Jubileus from the boss gallery.

Jubileus's Dea Rank Halo, shared only with one other Angel: Father Rodin

Close up view of Jubileus.

Jubileus, with damage shown from battling with Bayonetta.

Jubileus' soul after colliding with a planet.

Jubileus' soul before hitting the sun. 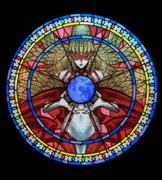 The stained glass window of Jubileus in the prologue

Jubileus's left half is destroyed

Jubileus caught in a Torture Attack.
Add a photo to this gallery

Retrieved from "https://bayonetta.fandom.com/wiki/Jubileus,_The_Creator?oldid=48447"
Community content is available under CC-BY-SA unless otherwise noted.