Bayonetta
Joy (ジョイ, Joi) are Seraphim of the First Sphere within the Hierarchy of Laguna. They are powerful, female-looking angels and the Laguna's high-ranking soldiers that said to have broken free of any physical conception, these angels are capable of shape-shifting.[1]

They're one of the enemies and mini-bosses fought in the first game, Bayonetta. They are first encountered during Chapter VI: The Gates of Paradise.

"Joys are members of the Seraphim class within the angelic hierarchy's First Sphere. These beings have broken free of any physical conception of form and have become truly spiritual.

Their body is as free as a flowing river, and it takes shape only on a temporary basis. Joys may take the shape of the human feminine form, but can also shape-shift, or even separate into multiple sentient forms, at will."

Though they have no definite form, assuming any form which they wish, they seem to prefer their female form. They appear to act as doppelgangers to Umbra Witches, possessing many of their moves and abilities and because of this have an incredibly wide range of attacks and powers. Their weapons seem to be made of the same material as Golems and the various curtain-like walls scattered across Paradiso and Vigrid. [1]

While defending Cereza from a Beloved, a Joy disguised as Bayonetta kidnaps the girl. After a short chase, in which the Seraphim attacks with light barriers, Bayonetta faces her doppelganger and the Joy finally shows its real form.

Joys are fast and powerful attackers with an incredibly wide range of attacks and abilities (and are even faster on Infinite Climax difficulty). Joys are notable for their ability to multiply at will, splitting into two, with the new Joy having full health and the first keeping its current health. They have no "spawning" animation when they appear, and as such can immediately launch an attack before they're even fully formed to catch Bayonetta off guard.

Sword Configuration: Joys can form their weapons into huge sword formations, when using a sword they have a tendency to dash forward to close distance in a way that mimics Bayonetta's Stiletto technique when wielding Shuraba, except their version is much faster, having little to no startup time and covering distance much more quickly. Once in melee range, they tend to use a combo that is similar to Shuraba's basic

combo, exploiting their sword's length with quick and wide horizontal attacks. They can also perform Shuraba's Bullet Climax, causing them to spin several times with the blade outstretched, however, unlike Shuraba's version this attack launches Bayonetta away instead of hitting multiple times, usually being used by Joys to knock her away when their health lowers to critical levels.

Whip Configuration: Forming their weapon into a wide curled ribbon of metal, Joys use their whips in a manner that mimics Kulshedra's basic

combo. When using this form they readily exploit the range advantage it gives them, standing and attacking from behind other angels where it's safer. They can also perform Kulshedra's Bullet Climax to attack Bayonetta when she's in the air nearby or to simply knock her away.

Ranged Attacks: Joys can also form their weapon into a set of pistols and when doing so will mimic Jeanne's method of firing a long slow arc of bullets in a sweeping motion across the battlefield in front of them. If these bullets are countered with the Moon of Mahaa-Kalaa they will be sent back at the Joy and interrupt her attack. In addition to this gun-like formation, Joys will also summon large formations of needle-like feathers that mostly mimic the ones Bayonetta can generate in crow form. When summoned the feathers will appear in one of two formations. The first is where they appear around Bayonetta for a moment before launching towards her in quick succession, and the second is where they will appear spinning around the Joy in a whirlwind before launching at Bayonetta. When in Witch Time these feathers can be attacked and shattered before they can become a real threat. Finally, they will send patterns of lasers your way similar to the tunnel chase sequence from Chapter VI.

Due to Joy's propensity to deflect bullets, parry or resist stagger from ranged attacks in general, and their innate agility and ability to dodge incoming attacks, weapons such as Scarborough Fair, Kulshedra, and Lt. Col. Kilgore are not recommended when fighting Joys.

Onyx Roses: With its combination of fast kicks, punches, and its ability to stagger enemies easily with its Charge Modifier, the Onyx Roses are a very powerful weapon against Joys due to their somewhat large hitbox. They allow Bayonetta to readily and easily punish Joys during Witch Time and interrupt their motions to summon feather-based attacks or their proceeding duplication animations.

Odette: Though not particularly deadly to Joys with its basic kick combos and somewhat low stagger rate, its Charge Modifier allows Bayonetta to freeze one or more Joys and give her some breathing space to deal with other enemies that may be accompanying them.

Sai Fung: Due to its incredibly high stagger rate the Sai Fung is an excellent choice when fighting Joys. It can effectively stun-lock them into place, allowing Bayonetta to attack to her heart's content. This high rate of stagger will also interrupt any and all actions a Joy tries to perform, other than their dodges, allowing Bayonetta to stop oncoming attacks, feather summons, or duplications before they start.

The Joy's unique torture attack consists of Bayonetta summoning a semi-sentient "Wooden Horse", and binding the Joy to it in a sexual manner with a thorn-chain whip that has a rose motif. Upon doing so, the Joy is pressed onto the device with Bayonetta's heel before she slams her full strength down into the Joy, driving her crotch into the horse's back and snapping her spine. Joys do not drop an Angelic Weapon of any kind when killed.

A Joy performing a Wooden Horse Torture Attack on a Vigrid Security Guard. 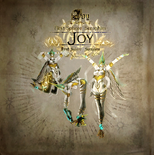 The Joy that disguised herself as Bayonetta.

Joy attacking with her own whip.

Joy from the Angel model gallery.