None
It was as the Lumen Sage foretold. Your power is indeed magnificent. Long have two eyes, one light and one dark, watched over the world and its history. It is this power that will allow the creator to start a new cycle of creation.― Iustitia, Bayonetta

Iustitia was one of the four Auditio of the Hierarchy of Laguna and Cardinal Virtue of Justice and Giver of Life, is an enemy boss in the first game, Bayonetta, who was seeking to recover the Left Eye of the World and revive Jubileus, The Creator. He is the third Auditio to be encountered and fought in a boss chapter.

"Within Paradiso's Divine Will, also known as the Cardinal Virtues, Iustitia, or Justice, is known to take a particularly strange physical manifestation. A large mass covered with numerous faces, and extending outwards via countless tentacles, Iustitia could easily pass for a demon.

This may be due to the fact that those depicting the angel are filled beyond comprehension with awe of the sheer difficulty of encouraging justice in the world. Among Paradiso's Divine Will, there are those who believe that Iustitia is the closest of the Cardinal Virtues to hell.

Justice is said to be based upon rules established by man, to be followed by man, and changing one's viewpoint can lead to a change in what is evil. This uncertainty may be a manifestation of the existing folklore and depictions of Iustitia."

Iustitia appears several times in Chapters IX and X as an unseen source to a large number of tentacles in Paradiso, usually destroying structures or just generally hindering Bayonetta's progress. It makes a more prominent appearance just after Bayonetta defeats the clones of the two previous Auditio, Courage, and Temperance, where it immediately slams one of its main tentacles onto the next island, making it spin, effectively hindering Bayonetta's progress.

He later appears in Chapter XI, where it fully reveals itself and challenges Bayonetta. It attacks Bayonetta with two tentacles and a tongue, which has a face and is his weak point. When Bayonetta deals enough damage to one of the tongues, Iustitia tries to drop debris on her, but she uses Wicked Weaves to punch the debris back, smashing the tongue and stunning Iustitia. Bayonetta jumps on to the top of the tongue and makes her way to the adult face and hits it, which makes it cough out a heart-like organ that holds the tongue in place, which she promptly slices off with her hands. Retreating back to solid land, Bayonetta has to repeat the same tactic twice more, to two more tongues respectively. After this, Iustitia attempts to ram into Bayonetta in a last-ditch attack, but she counters and then summons Scolopendra, who crushes Iustitia into a bloody ball. Having been defeated, Iustitia compliments Bayonetta's power and is dragged into Inferno, but not before repeating the line of his fellow Auditio: "May the Creator, Jubileus, grace you."

Justice appears on an elevator shaft of the Ithavoll Building. It attempts the use the same tactic as Iustitia, and because of its weaker abilities, it is easily defeated.

Iustitia reappears almost briefly as the last mini-boss during Chapter XIV: The Witch Hunts, performing a surprise aerial attack on Bayonetta. He makes a sudden reappearance just as Bayonetta destroys the massive angelic war machine Worship in her Umbran Armor, attacking her with wickedly fast tentacle whips and firing a rainbow-colored laser from his top head. After weakening him, Bayonetta finishes Iustitia off by activating her mech armor's self-destruct sequence, which wounds the Auditio enough for him to retreat as well as completely destroying a much larger war machine that was hovering above them.

Iustitia may also be fought in Tag Climax, his Verse Card can be unlocked by completing the 4th Witch Trials.

Much like all Auditio, Iustitia is colossal in size compared to other Laguna. It appears to be a hideous amalgamation of faces and tentacles fused into a ball. Iustitia has fifteen faces in total. The adult faces have massive tongues protruding from their mouths, ending in child faces (with expressions representing euphoria for the first face, the rage for the second, and despair for the third). The last is only clearly seen during one cutscene and on the model in the gallery, which is also child-like and with which he communicates. This last "young" face is hidden on top of its body, beneath its halo. Iustitia has six total tentacles, three that merely protrude from its body and the other three mentioned above (acting as tongues) that are connected to the main organs that vaguely resemble hearts. Destroying the tongues' faces reveals a pair of reptilian eyes. Iustitia's tentacles are barbed and can release a powerful toxin. It also has a curious glow that seems to emanate from its back. Huge sheet-like glowing crystals spike out from its sides.

Normally, Iustitia does not speak, only making disturbing gurgling roars. When defeated, however, it speaks to Bayonetta with the voice of a child.

Justice looks exactly like Iustitia, but only has one side to it; in other words, three tentacles with one main, one child face, one adult face, and one heart. The 3D model shows that there is nothing behind it - only the glowing sphere beneath. This means that Justice will die immediately upon its heart being sliced off.

Iustitia has several different abilities, ranging from lasers shot by the tongues' child faces and brute strength from the other tentacles. These tentacles can open up and eat things, and attempt to if Bayonetta falls off the platform to the acid below (getting eaten will result in immediate death). The tongues create rotating blades and other damaging objects when Bayonetta runs along with them. The tentacles can spew acid on the platform or pick up rubble to drop on Bayonetta, and the child faces can spit a sticky sap that restrains Bayonetta's movements.

Justice can do all of the same abilities except eat Bayonetta, because of the lack of a pit with which Bayonetta can fall down.

Iustitia represents the element of Earth, which symbolizes all life, hence why it is called "Giver of Life". Its circular body with many faces is similar to religious descriptions of Cherubim, the second-highest order of angels.

Iustitia may be based on Archangel Uriel, which is associated with divine justice and, in medieval grimoires, with the element of earth. Noticeably, it is the only virtue whose appearance and powers involve actual light, in the form of the rays shining from its body and the laser blades on its tentacles, and Uriel means "light of El/God".

Despite standing for the virtue of Justice, Iustitia is not one of the themes by personality, but rather through symbolic means and characteristics. Being that the ideals of Justice vary from person to perspective, Iustitia is, however, overall, an Angel, and the plot's overarching events and implications come to show that they are with their own goals and agendas to achieve their own "justice" than out of any meaningful or reasonable cause or harmony with humanity. Because of this, it can be mistaken that he is the only Auditio who has any ideal personality with his virtue. 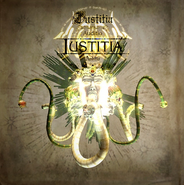 Iustitia's body after being crushed by Scolopendra

Justice from the boss model gallery 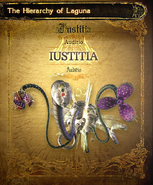