Bayonetta
Irenics are Principalities of the Third Sphere within the Hierarchy of Laguna. They are car-shaped angels that only appears in Chapter VIII of the first Bayonetta game on a highway called Route 666.

"If humans were truly able to see angels, they would never expect an angel to appear as an automobile.

However, it goes without saying that Irenic has existed since long before even the concept of history. Irenic is charged with spreading the message of Divine Will across Paradiso, and is most commonly depicted as a boxy form with four wheels capable of achieving great speeds.

Faster than even the wind, it can cross Paradiso, thousands of times larger than the human world, in nary a single day. Irenic is first known to have appeared before humanity in the mid-18th century, coinciding with the start of the industrial revolution and the development of the first steam-powered automobiles."

Irenic only has access to a single attack that causes it to drop obstacles in Bayonetta's path. This enemy may appear with an Affinity perched atop it for support, and its more dangerous variant carries a Joy.

As Irenic possesses weak body armor, this enemy only takes a few hits to destroy.

A single Irenic appears in the animated adaptation of the first game. Unlike its game counterpart, which was virtually powerless and merely served as transport for stronger enemies, this Irenic is equipped with missiles and the ability to fire lightning from its face. As Bayonetta drives her motorcycle along Route 666 to Vigrid's airport, she is chased by the Irenic. After dodging its attacks, Bayonetta summons Scolopendra to crush the angel, destroying it instantly.

The term irenic means "aiming or aimed at peace." It also refers to "a part of Christian theology concerned with reconciling different denominations and sects."

Irenic's car-like design is a reference to the Ophanim, a class of angels that serves as living chariots.

In Christianity, Principalities are the highest-ranking angels in the Third Sphere. They take orders from the Dominions, inspire art and science, watch over large groups of people, and bequeath blessings to mortals.

Irenic as it appears on the introduction screen in Bayonetta 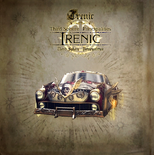 Irenic as it appears in the Hierarchy of Laguna

An in-game model of Irenic

Irenic as it appears in Bayonetta: Bloody Fate

Irenic launching a series of missiles in Bayonetta: Bloody Fate