Inspired are Thrones of the First Sphere within the Hierarchy of Laguna. In the first game Bayonetta, they can be seen flying around the skies of Paradiso. Inspired act as the Laguna's aerial border patrol. These angels are snake-like with red skin, golden wings, and golden helmets.

"Inspired are members of the angelic First Sphere, in the rank known as Thrones. Those in this class are spiritual beings of the highest order, never meeting directly with humanity. Works of art have depicted them as flaming wheels; however, artists of true inspiration have pictured Inspired as a long snake-like body circling upon itself.

It is often thought that Inspired acts as a wheel, holding up the chariot of the beloved God. In truth, Inspired are actually fighting alongside their angelic cohorts, randomly swallowing up the followers of darkness."

Inspired appear throughout the game as minibosses. They move quickly through the air, making it difficult to hit them. Inspired can spit fireballs at Bayonetta while in the air or if the player is far away from them, within melee range they can whip their bodies around or attempt to bite. Enough damage while mobile will stun one long enough to finish it off.

In the Inspired counter, Bayonetta jumps on the angel's head and summons Madama Butterfly, who repeatedly punches and stomps the angel until it sends it into the air and Bayonetta plummets it to the ground. In the Inspired Climax, Bayonetta begins to summon the demon crow Malphas, however, the Inspired regains consciousness and tries to devour her; thankfully Malphas arrives in the nick of time to rescue its summoner. As the Inspired is helplessly wiggling in Malphas' talons, Malphas then bites down on the Inspired's neck and begins to pull until the head is ripped off and then it begins to gulp it down throat first then flies off into the Inferno.

Rare golden-skinned Inspired appear in Chapter X: Paradiso - A Sea of Stars as the last enemies of the chapter and final verse, two then one of these Inspired appear after destroying the golden Beloved. These Inspired functions the same as their red counterparts but are a lot harder to mobilize as they will primarily stay in the air and only appear from the ground to lunge at Bayonetta.

The Jade-colored Inspired appear during the first two verses of Chapter XIV: Isla Del Sol, a single one is fought, flying towards Bayonetta, Cereza, and Luka's missile while also spitting out fireballs. A group of three are then fought in the next verse and are defeated with the same tactics.

A single Inspired appears in Bloody Fate, shortly after Bayonetta has destroyed Temperantia and several Affinity attacking Luka and Cereza, she is ambushed by an Inspired, grabbing onto its back and taking to the air, Bayonetta then leaps off and fires two shells from the Lt. Col. Kilgore weapon, the ammunition is swallowed by the Inspired which then explodes. 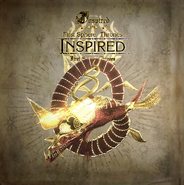 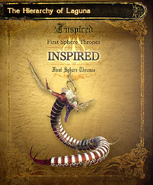 Golden Inspired from Sea of Stars.

Inspired as seen in Bloody Fate 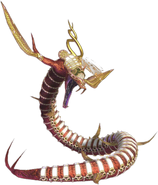 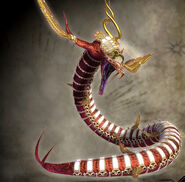