Insidious, also known as the Consumer of All, is an enormous manta ray-like demon with a bone-white underside, a skull-like face with blood-red eyes mounted into its torso, a whip-like tail with a crescent blade at the tip and fin-like wings equipped with jets and massive eyes.

In the second game, Bayonetta 2, Insidious acts as one of the bosses that Bayonetta has to fight during her journey through Fimbulventr's depths. It also acts as a stage to fight through, in the form of its innards.

"A hellish ark that, while seemingly leading sinners to the Garden of Eternal Pleasures at the end of the world, was in actuality abducting them to compete in a massive bloodbath.

The souls who boarded Insidious were led nowhere. Surrounded by the stench of death and rotten flesh, they massacred each other, struggling over whatever morsels of food to be came across.

With a unique organ in his body that converts death into demonic energy, Insidious always carries a tremendous amount of power. A myriad of hell's creatures live within his gut, making him useful as an assault ship during wars with Paradiso.

If swallowed by Insidious, the only way to escape is to stand atop a tower of corpses and wait for him to open his jaw while he engorges with his next feeding. However, those who take pleasure in killing may find their true Garden of Eternal Pleasures within this demon's bowels."

Insidious first appears during the Records of Time section of the game, although it is not fought at this point. Several Insidious appear in the background during the battle between angels and demons; Bayonetta eventually rides on one's back, where she fights a group of Beloved while piloting the Umbran Armor. Eventually, a Valiance effortlessly cleaves the demon in two with its sword. At the battle's climax, another Insidious swoops in and fires two massive beams from its eyes.

Insidious makes its proper entrance in Chapter VII, where one attacks Bayonetta and Loki as they travel through the water-filled underground caverns of Fimbulventr aboard the Ark. Most of its offensive abilities come directly from the eyes on the underside of its wings. Each eye is capable of firing large purple lasers across the battlefield, summoning tendrils around themselves that can swipe at Bayonetta to damage her and can even close with heavy lids if she gets too close. The eyes can also chomp at Bayonetta by splitting apart to create a sharp-toothed maw, though they only seem able to do so if their protective eyelids are destroyed first.

Insidious also uses its size as a formidable weapon, attempting to destroy the Ark by ramming its body against the side and firing a barrage of homing missiles from its mouth. It also attempts to inhale Bayonetta, much like Gomorrah.

After Bayonetta uses Madama Butterfly to rip one of Insidious's eyes out, the demon attempts to blast the Ark with a beam from its remaining eye. Loki responds with a beam from the Ark, causing a brief stalemate until Insidious's power falters and its other eye is destroyed, finally killing it. Immediately afterwards, another Insidious ambushes the two and swallows them alive. Bayonetta battles her way through the demon's innards and eventually clashes with the Masked Lumen, causing immense damage to Insidious's body. At the climax of the fight, the Insidious explodes from the damage it sustains, releasing the people within and sending them flying elsewhere.

Another Insidious appears in Chapter X in the depths of Inferno's Johnson Wood. It is initially buried in the ground, but takes off with Bayonetta and Rodin in tow. The two battle demons atop Insidious' back as the demon flies them to Alraune's castle.

Insidious makes a return during the Jet Fighter Assault section of Chapter XVI; Bayonetta and Balder work together to shoot and slash at the demon while it assaults their fighter. After both its eyes are destroyed, Insidious falls back and appears from behind for one last assault, sending out hails of bloody orbs and slowly drawing the jet in closer. Bayonetta and Balder destroy it for good and make their way to the peak of Fimbulventr. Several more Insidious appear in the distance, battling angelic forces.

As the initial battle against Insidious takes place underwater, Bayonetta's movement and speed are limited by the battlefield. As such, ranged weapons such as Love Is Blue or Kafka are an idea to maintain combo points when the demon pushes her away with its attacks. Up close, high-damage weapons such as Salamandra are ideal for the moments when Insidous' eyes are exposed; Kafka also serves a secondary backup thanks to its poisonous effects.

During the battle in Chapter XVI, it is recommended that magic be saved up for most of the fight until the final section where Insidious attempts to suck the jet in. This section can lead to a Game Over if Insidious is not destroyed in time and Umbran Climax becomes very vital to do this in the game. 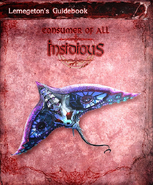 Insidious from the models gallery

Insidious during the Records of Time: The End 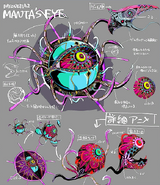 Bayonetta inside an Insidious