N/A
Hydra, also known as the Spinner of Destiny, is a gorgon-like demon that appears as an ally in the second game, Bayonetta 2. Summoned against a handful of enemies throughout the game, Hydra also appears as the main demon for multiple weapons during Umbran Climax.

"A once beautiful maiden who was banished to hell for the sins of her younger sister and mutilated into a snakelike monster with seven heads.

Her human heart has long since been lost, and she viciously attacks anything she deems an enemy. Those trapped by her seven heads must suffer slow, painful deaths.

Out of her many heads, only one is real; slicing off any of the others will not amount to much more than a scratch."

Hydra first appears in the story during Chapter VI. As Valor attempts to lunge his sword in a final desperate blow at Bayonetta, she summons Hydra, who coils her snakelike appendages around the now weakened angel. The demon holds Valor in place and sends him to Inferno, but not before he can have the last laugh by obstructing Bayonetta and Loki's progress to Fimbulventr.

Hydra later appears in the final phase of the second Masked Lumen fight inside Insidious during Chapter VII. Hydra is summoned to combat the Sapientia that has been summoned during the fight and the angel and demon clash whilst obscured by rivers of blood. At particular points, Bayonetta can counter the Sage and send him flying into the maw of one of Hydra's snakeheads, greatly damaging him. At the climax of the fight, Hydra deflects several of Sapientia's homing missiles with a mighty roar and blocks the angel's quadruple laser beam attack with its bladed heads. The ensuing explosion causes internal damage to the Insidious, causing it to explode.

Hydra appears one last time during the end of the final Loptr battle. After fighting back against Loptr's attempts to take the Left Eye, Bayonetta summons both Labolas and Hydra to attack the prophet, but he easily destroys both demons.

Outside of her appearances in the story, Hydra is shown through Umbran Climax as one of the demons for Love is Blue, Alruna equipped on the hands and the only demon for both elements of the Undine weapon, drenched in fire or ice. Hydra's snakeheads are the only parts of the demon manifested and either lunge at enemies or swing themselves in wide arcs from where they are summoned.

Hydra is also the Torture Attack against Sloth. She will appear from the ground and wrap her snakeheads around the demon, crushing it and dealing one-third of Sloth's health in damage. If this attack does not kill Sloth, it will take a few seconds to regenerate its limbs and begin fighting again.

Resembling a gorgon's severed head, Hydra's main features are obscured by a red, crescent-adorned veil, hinting at her human origins. Protruding from the back of her head is a long, thick snake tail. Kept together in a scaly, ornamented headband are Hydra's seven other slithering heads. Each head has gold plating, red blades on their snouts, each possessing sharp teeth, a skinny blue tongue, and an eye inside the mouth.

Hydra's abilities take form in her snakeheads that the main, veiled head appears to be in control of. The heads are capable of constricting and squeezing prey to death in a similar vein to Scolopendra and can also lash out with astonishing speed to use their physical mass as a weapon. Hydra's heads can also let out a piercing scream that is powerful enough to deflect enemy projectiles and the red blades on each snakehead can also deflect attacks due to their sharpness.

Hydra gets her name from the Lernaean Hydra of Greek mythology. The Hydra of Lerna was capable of regenerating two more heads if one had been cut off. In order to defeat the Hydra, Heracles and his nephew, Iolaus, has to cut off each head and quickly cauterize the open wounds with fire so that it could not regenerate, in some versions with fire. In another version of this story, Heracles used the Hydra's own venomous blood as the cauterizing method.

Hydra's appearance also resembles Medusa, a beautiful, celibate maiden who raped by the god Poseidon and had intercourse with him, angering the goddess Athena. As punishment, Athena cursed Medusa, turning her hair into snakes and causing her very gaze to turn any who looked at her to stone. The hero Perseus eventually killed her, bringing her severed head back with him as proof of his deed. Hydra's appearance can be interpreted as Medusa's head. 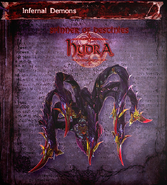 Hydra about to attack Loptr