Hideous, also known as The Craver of Hatred, is one of most basic demonic enemies in Bayonetta 2. Acting as the infernal version of the Affinity, they commonly appear in the company of various other demon types, especially Hatreds and Greeds, and are the most common demonic enemy found in the game.

"A clan of the demons who infest the Malebolge caves of Inferno. They constantly scuttle in groups, searching for unfortunate prey who have lost their way. Hideous often appear in groups in the human world as well, but displaying no cooperation in movement. For them, there is only scrambling for prey in a mad dash.

Yet, Hideous possess a very strong intelligence, able to forge various weapons and rarely challenging enemies that appear in larger numbers than their own.

Hideous has a minor appearance in Bayonetta: Bloody Fate, appearing in one of the stained-glass windows above Gomorrah, Malphas and opposite Affinity in the movie's prologue.

Hideous first appears in Chapter VII: The Ark, after Bayonetta and Loki have been swallowed by an Insidious, Bayonetta's trek through its internal system, takes a halt as she comes face-to-face with Hatred and a few Hideous.

Hideous comes in 3 distinct types, each wielding a different weapon. They have low health and are quite weak and slow compared to most other demons, though they can be overwhelming in numbers. When at low health and on the verge of dying, Hideous tend to do a war-cry and go into a berserk state. Like all enemies when in this state, they attack much faster and have a very high resistance to staggering effects. Hideous also has the ability to fly.

Hideous A: Slightly more common than other Hideous, this variant carries a long scythe that has a dark purple blade. Though the majority of its attacks are easily telegraphed, on harder difficulties the swing time for its attacks are much shorter and the demon tends to use a fast cleave that has no audible cue frequently.

Hideous B: Wielding a pair of sharp, chainsaw-like swords, Hideous B's attacks are slightly stronger and faster than Hideous A's but are still easily telegraphed, meaning only a little more precision is required to beat them.

Hideous C: The ranged version of Hideous, this variant carries a shotgun which it uses to fire powerful shots at Bayonetta from quite a distance. The main cue for an attack from Hideous C is the shot path that appears along the ground, giving a visual note as to whether Bayonetta is in the line of fire.

Being the basic grunts of the demon enemies, Hideous are easily dealt with through the use of any weapon in Bayonetta's arsenal. This means that they can be fought with your preferred weapon combinations of choice. 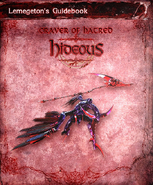 Artwork of Hideous A 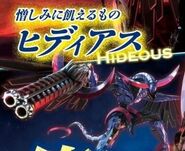 Retrieved from "https://bayonetta.fandom.com/wiki/Hideous?oldid=49975"
Community content is available under CC-BY-SA unless otherwise noted.