N/A
Hekatoncheir, also known as the Shatterer of the Earth, is an unseen demon with large, powerful hands that appears in games so far, Bayonetta and Bayonetta 2. One of the more powerful demons to appear in the game, Hekatoncheir's strength is put to good use against Bayonetta's enemies.

"A giant endowed with six fearsome arms capable of pulverizing mountains, those unfortunate enough to fall underfoot of the demon are subject to days-long violent earthquakes.

Lacking knowledge, but brimming with brutality, it is said that even the most powerful of conjurers should take heed of the danger this beast presents."

Hekatoncheir first appears In Chapter VII of the first game. Bayonetta summons the multi-armed demon at three points during the fight with Temperantia. The demon initially uses several of its limbs to hold the angel in place while the others pull off its arm entirely. At the climax of the fight when the angel has been reduced to only its body, Hekatoncheir repeatedly punches it in the head until one final punch flattens it into submission.

Later, in both Chapters IX and XV, Hekatoncheir appears to finish off the spherical Golem enemy, hitting it around the air in a short game of volleyball. However, the last pair of hands fail to hit and allow Golem to bounce to the ground. After an awkward moment, Hekatoncheir's hands then pummel Golem to pieces, destroying it.

Similar to its game counterpart, Hekatoncheir's limbs are summoned by Bayonetta to finish off Temperantia at an airport on Route 666, similar to Vigrid's airbase. Two of its arms hold the Auditio's own with such force that it crushes part of Temperantia's arms while another two then begin to brutally punch the angel in the face. A final punch hits so hard that it leaves the angel with a large, bloody hole in its face (similar to Fortitudo's fate from the game). Hekatoncheir disappears and Temperantia is soon grabbed by hands from Inferno and taken down to hell.

Hekatoncheir reappears during Chapter IX, once again as the Climax finisher for another Golem. After Bayonetta whittles it down, she summons Hekatoncheir to finish it off in reverse order to how it acted in the first game. The demons punch Golem repeatedly first to break away its outer shell before launching it into the air to play its volleyball game. Hekatoncheir successfully finishes the spike and sends the Golem, towards the barrier around the Gates of Hell, causing it to shatter.

Hekatoncheir makes a brief appearance during Chapter XIV, where Rosa summons the demon to hold Sapientia in place and allows Bayonetta to proceed unscathed.

Hekatoncheir is also the affinity and demon summoned during Umbran Climax for the hammer weapon Takemikazuchi. Wicked Weaves from this weapon will always come from Hekatoncheir and, Umbran Climax doubles the amount of damage that can be inflicted. Some attack motions include palm thrusts, slams, claps, and spinning fists.

Hekatoncheir's entire form is never seen and only its hands are ever manifested when it is summoned. On the tip of all its fingers and thumbs are several ram heads that each bear slight differences in design. In Bloody Fate, the ram heads all appear the same. Hekatoncheir also has spiked bracelets on each of its arms.

Hekatoncheir is based on the Hecatoncheires (Hundred-Handed Ones) of Greek Mythology, giants who all had fifty heads and one-hundred arms born from the goddess of the earth, Gaia and Uranus, the god of the skies. The Hecatoncheires were said to have dangerously high power over storms and hurricanes. 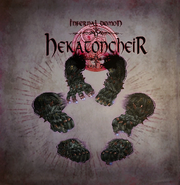 Hekatoncheir summoned by Jeanne in the demons model gallery. 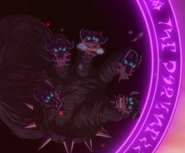 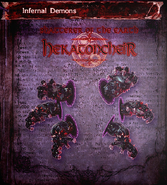 As seen in the Book of Infernal Demons in Bayonetta 2

Hektoncheir during Umbran Climax in Bayonetta 2

Hekatoncheir summoned by Jeanne in Bayonetta 2