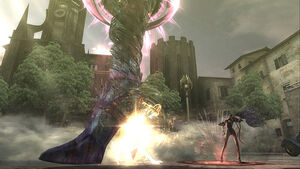 Heel Stomp is Tetsuzanko's sister Technique that Bayonetta can use with any weapons equipped on her feet in both the original game and the sequel so far. Like Tetsuzanko, it can be purchased at the Gates of Hell.

By rapidly pushing the control stick in opposite directions followed by the kick button, Bayonetta stomps her foot onto the ground using the heel of Madama Butterfly. When there is enough magic orbs in her gauge, using Heel Stomp caused an instant downward Wicked Weave to appear. The Wicked Weave will down an enemy, leaving them open to further attacks and can also be used from a medium distance.

Heel Stomp returns in Bayonetta 2 with some slight variations. It functions in the same way as in the original Bayonetta with almost all weapons with the exception of Salamandra, Alruna and the Chain Chomp, in which case she will slam the weapon down in front of her instead of summoning a Wicked Weave. If Heel Stomp is used during Umbran Climax, it will summon a few of Hydra's snakeheads to drop down on enemies. The exception to this is with the previously mentioned weapons which will instead summon their own unique Wicked Weaves.

In Super Smash Bros. for Nintendo 3DS & Wii U, Heel Stomp acts as one of the variations for Bayonetta's Wicked Weaves which serve as her smash attack. Heel Stomp's size and power make it extremely effectively near the edge of stages, able to spike multiple enemies downwards.