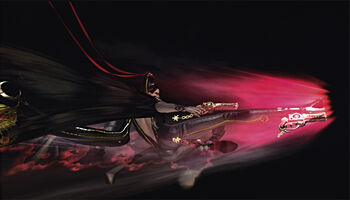 Similar to Stiletto, Heel Slide is a Technique used for simultaneously closing distance between Bayonetta and her target whilst also attacking them by using the weapon equipped to the foot slot. In comparison to Stiletto, Heel Slide is faster, does much more damage on average and goes a lot farther. Unlike Stiletto, however, it cannot be executed in mid-air, and if attempted Bayonetta will instead execute a downwards After Burner Kick. The player just needs to time it right.

Heel can be purchased from the Gates of Hell from the beginning of the game onward for 20,000 Halos.

Heel Slide can be executed by pressing

. Like with Stiletto, the move differs in animation and use depending on the weapon being used.

The Heel Slide action for these weapons is nearly identical, with the Charge Modifier giving them differences. Scarborough Fair, the Handguns, Bazillions, and Love Is Blue fire numerous bullets from the beginning of the technique to the end, depending on how long

is held. If the button is held down long enough, Bayonetta with that backflip back into a standing position, sending weaker enemies skyward. Unlike its Stiletto counterpart, the Onyx Rose version of Heel Slide is especially powerful when

is held as Bayonetta will fire the shotguns a maximum of three times.

Unlike the other bladed weapons Bayonetta possesses, Rakshasa can be equipped on her feet to allow her to use Heel Slide. It functions in the same way as her guns do, though holding the button down will cause her to spin and slash at enemies in her path with the swords.

Using Heel Slide with Odette will let Bayonetta slide forwards on a trail of ice crystals to low-kick her target. If she is moving then the technique is activated, it sends her forward so much that it usually causes her to slide well past her initial target. If

is held down, she will tumble backward while kicking and unleash a large ice crystal in front of her that will launch enemies up into the air and away.

In the same way as Stiletto, Durga and Undine use Heel Slide, in the same way, to close in on enemies and change depending on the Charge Modifier and current element. Durga either leaves a burning demonic skull behind or a quick shockwave of lightning. Undine allows Bayonetta to fire out a blast of flame or ice the longer the button is held down.

The most damaging of the Heel Slides on its own. When executed, Bayonetta will slide towards her target and if

is held down, she will fire a rocket and perform the same backward tumbling kick she does during Odette's Heel Slide to fire a second rocket towards a nearby target. Lt. Col. Kilgore's Heel Slide is very good in tight spaces or when diving into a large group of angels as the two explosions will cause a massive area of effect damage while also stunning everything around Bayonetta twice.

Like with its Stiletto counterpart, Alruna's Heel Slide doesn't cause Bayonetta to dash towards her target. Instead, the whip on her left foot shoots forwards, zig-zagging towards her target quickly in wide scope and hitting everything in a line in front of her.

When Salamandra is equipped to Bayonetta's feet, Heel Slide takes a moment to start before shooting forwards and slashing enemies in a circular kick for multiple hits.

The Chain Chomp's Heel Slide is similar to the Lt. Col. Kilgore in the fact that it hits enemies twice. It causes Bayonetta to lunge forward a considerable distance, sweep the Chain Chomp around her in a circular kick before launching it off the chain in a straight line towards her enemy.

In the first game, Rodin's Heel Slide functions almost exactly the same as Shuraba's version of the Stiletto technique where Bayonetta will lunge forward with a huge golden Ardor sword. This attack does considerable damage but is slower than other Heel Slides due to being based on the Stiletto animation.

In Bayonetta 2, the Heel Slide for Rodin summons the mighty shield of Accolade D and allows her to block and repel any attacks that come near her.

Heel Slide appears in Super Smash Bros. for Nintendo 3DS & Wii U as Bayonetta's ground side special, functioning identically to how Bayonetta performs it in the games with gun weapons. When in use, she charges forward to knock enemies off their feelings and can shoot when the special button is pressed. Like with all of Bayonetta's moves in the game, holding down the button long enough will cause her backflip to knock enemies skyward and allow her to chain the move into a combo.