Hatred, also known as the Holder of Enmity, is a tougher and stronger version of Hideous and a demonic enemy in the game, Bayonetta 2. Acting as the Infernal version of the Applaud, Hatred tends to accompany groups of Hideous on the battlefield and can sometimes appear in pairs.

"A Hideous that has been forced into starvation and has resorted to devouring its siblings to survive.

Wielding enough power to stand alone in a fight, Hatred's anger and unspeakable rage still claim complete control of the Hideous around him, who tremble in his presence."

Hatred acts similar to Hideous but is physically larger, stronger, and much more durable in taking attacks. Its increased size gives it much farther reach than Hideous and, by extension, its attacks are more dangerous.

Like the A variant of Hideous, Hatred carries a distinct scythe weapon and utilizes it in slashing attacks that can either be easily telegraphed or hard to see on higher difficulties. Due to the weapon having two blades, Hatred has some skills unique to using it such as its ability to spin the weapon to parry incoming bullets. It also can frequently block attacks and break a combo. Though much stronger than Hideous, Hatred is not as powerful as other demons such as Greed or Sloth in its damage-dealing capability. Basically one of the weakest of the bunch in comparison.

Like Hideous, Hatred is easily dealt with by the player's preferred weapon combinations as they are still fairly basic when compared to other demons. So many combinations, any weapons, or any attacks would be easy picking against this demon. 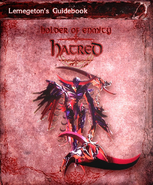 Hatred verse card
Add a photo to this gallery

Retrieved from "https://bayonetta.fandom.com/wiki/Hatred?oldid=49950"
Community content is available under CC-BY-SA unless otherwise noted.