Bayonetta
Harmonies are Dominions of the Second Sphere within the Hierarchy of Laguna.

"Within the Second Sphere Dominions, whose name imparts feelings of control, sovereignty, and governance, the angels named Harmony stand as a special symbol of peace.

When appearing in our world, it is said that humans experience their presence as an aurora-esque light; however, when viewed from Purgatorio, one would see Harmony embracing humans within their outstretched, fin-like wings.

Often pictured holding a trident and floating through the skies, Harmony are tasked with the defense of the heavens, even within Paradiso itself."

Harmonies are aerial manta ray-like entities with two arms and insect wings. They usually attack in packs of five or six. Their attacks consist of charging their tails or claws with electricity and sweeping at Bayonetta, though this is easily avoided since Harmonies crackle with electricity before attacking. Their other attack is summoning three slow-moving electric balls. These can either be destroyed or avoided altogether. Another of Harmony's attacks is to fire a series of small electric orbs at Bayonetta. This attack is hard to avoid and deals heavy damage.

When executing a Torture Attack against Harmonies, Bayonetta jumps on top of one, pulls out a large chainsaw, and lacerates the Harmony in half, killing it once the Torture Attack is complete, regardless of its health. This torture attack is unique in that the chainsaw can then be used as a weapon until it vanishes like the angelic weapons itself.

In Christian mythology, Dominions are powerful angels that watch over the rulers of nations.

Harmony's design is likely derived from an angel of destruction, Abaddon (also called Apollyon) and his subordinate angels - who are said to appear in the form of locusts with long hair and scorpion tails, which they use to torment unbelievers. 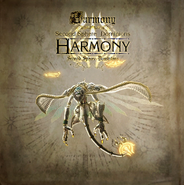