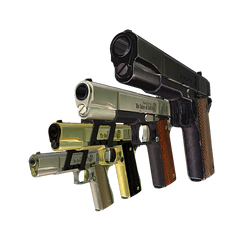 Now this is cheeky, throwing me these cheap toys!― Bayonetta, Prologue - The Vestibule

The Handguns are a weak weapon, rarely used for anything other than making the game slightly tougher and/or for the tutorial. They function exactly the same as the Scarborough Fair in regards to combo attacks.

In the first game, the Handguns are Bayonetta's initial weapons on the first playthrough during the Prologue, where Bayonetta will refer to them as 'toys' due to their weak strength and firepower. She eventually replaces them with Scarborough Fair in the next chapter.

In the second game, Bayonetta 2, the Handguns are once again Bayonetta's initial weapons when the angels attack in the Prologue. After fighting off enough angels, the guns all break from the stress, to which Bayonetta remarks this situation is why she would never usually buy them on sale. She soon receives her Handguns' replacements, Love is Blue, from Rodin. If Bayonetta uses the Hanguns, they will have Love Is Blue combos.

"Automatic handguns produced by Rodin. Unable to withstand the intensity of magic-imbued bullets or melee attacks, those capable of such feats must be careful in holding back their full power."

"Automatic pistols from Rodin to serve as some means of protection in the human world. Designed to be used by normal humans, these weapons are unable to withstand concentrated amounts of magic when firing, so witch energy must be controlled carefully."

The Handguns are Bayonetta's and Jeanne's default weapon in the Prologue on your first playthrough before being replaced with Scarborough Fair or All 4 One at the end of the Prologue. For later play, simply complete the game on Normal and these 'toys' are yours.

The Handguns are Bayonetta's, Jeanne's, and Rosa's first weapons at the very start of the Prologue before being replaced with Love is Blue, All 4 One, or Unforgiven midway through the first verse.  For later play, simply complete the game on any difficulty and these 'toys' are yours.

The Handguns' most notable traits are their weaker damage and inability to produce Wicked Weaves on the limb the guns are equipped to. Their Bullet Climaxes and Charge Modifiers function exactly the same as Scarborough Fair and Love Is Blue, albeit with less damage-dealing potential.

This combination of low damage and lack of Wicked Weaves, however, gives them a valuable place in Alfheims that require the execution of many Torture Attacks as they can rack up numerous hits to build up magic without killing your enemies outright.

Bayonetta using her handguns in Bayonetta.

Bayonetta using the handguns in Bayonetta 2.