Greed, also known as the Confuser Of Elements, is three-headed Cybrid demonic enemy that Bayonetta encounters as she journeys to Inferno in the game, Bayonetta 2. Greed first appears in Chapter VIII and is one of the stronger demons that players will encounter over the course of the game. Greed act as the demonic equivalent to angels Fairness and Fearless.

Though they are constantly hungry, they are unable to send the waste left behind from their constant gluttony. Those who are devoured by Greed are destined to be trapped for eternity, forever cut off from the cycle of death and rebirth.

At times he was tasked as the gatekeeper of hell, denying entrance to unwanted visitors, yet no victim can ever satiate his endless appetite. Previous "owners" still remained trapped inside his stomachs, waiting for the day of his defeat."

Greed is a frequently recurring demonic enemy that, while moderately slow, is also a large threat on the battlefield. When close to Bayonetta, it will attack by swiping its claws and attempting to bite and toss her around, similar to Fairness and Fearless. Its main attacks, however, come in the form of elemental blasts from its three heads in a similar fashion to the Undine weapon. The two heads at the demon's front will breathe fire, whereas the lone head at the back will breathe ice. If Bayonetta is hit by the latter attack, then she will be frozen solid and left completely helpless until she breaks out of the ice chunk, which is done by shaking the left stick on the controller.

If a Torture Attack is initiated on Greed, Bayonetta will summon Mictlantecuthli who will slam down onto the demon and start drilling through it in a tornado. At the end of the attack, Greed explodes from the assault and dies instantly. Do it again when it appears again the faster the better.

Despite appearances, Greed's attacks can come quicker than most players are expecting, epsecially on the higher difficulties of the game. Luckily, it can also be stunned with virtually any Wicked Weave thrown its way meaning that a lot of Bayonetta's arsenal can adequately deal with it. For the quickest victory, the high damage of Salamandra or the speed of either Love Is Blue or Rakshasa can leave Greed stunned for most of the battle. As with most enemies in the game, Alruna's Charge Modifier can also temporarily incapacitate Greed if executed perfectly during Witch Time. 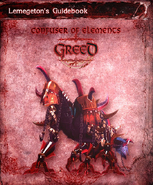 Greed's introduction screen, naming it the Confuser Of Elements